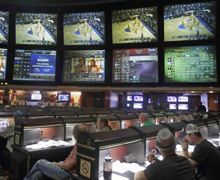 By Eric Kelsey | When the annual NCAA college basketball tournament crowns a champion in three weeks, some $9 billion is expected to be wagered on the sporting event known as March Madness, and most all of that will have been done illegally, according to the American Gaming Association.

A pot of $9 billion is more than half the total bet annually on the National Football League’s Super Bowl. Yet that’s just an estimate. There’s really no reliable way to track how much money is wagered on the NCAA basketball tournament because so much of it is done through the ubiquitous office pool.

Stephen F. Ross, director of the Penn State Institute for Sports Law, Policy and Research, gets right to the point: “It’s very difficult to get that data.”

Gambling on college athletics is only legal in Nevada, which will see an estimated $240 million wagered on the tournament that begins Thursday. Of all bets, $2 billion alone is expected from individuals filling out brackets, according to the gaming lobby. The Kentucky Derby, by comparison, generated about $187 million in bets from all sources, according to Churchill Downs. 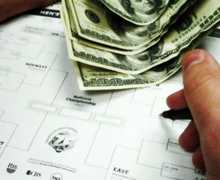 Although it’s difficult to track the money passed around under the table and at the office water cooler, the NCAAand television networks CBS Time Warner‘s Turner Broadcasting stand to indirectly profit from all that gambling, Ross said, as betting gives viewers a reason to watch games at odd times, and between teams which they would otherwise have little interest in.

“Like the National Football League, the NCAA has a huge symbiotic relationship with these groups because the NCAA officials obviously know that a major factor that contributes to their humongous TV rights package is the amount of gambling,” Ross said.

CBS and Time Warner-owned Turner paid $10.8 billion for the rights to broadcast the tournament from 2011 through 2024. Despite a 2.5% decline in overall tournament viewership last year to 102 million, the cost of 30 seconds of TV advertising during championship game has risen 5% to nearly $1.5 million, according to Kantar Media. The game will take place April 6.

That ranks ahead of all sports post-season games except for the Super Bowl and the NFL’s conference championship games. The 67-game, NCAA tournament was sports top postseason in terms of ad spending until the NFL playoffs climbed past it last year. The 2014 NFL playoffs drew $1.2 billion in ad sales, while the NCAA tournament pulled in $1.1 billion.

More than 70 million brackets will be filled out this year among 40 million people, the American Gaming Association study estimates.

It’s also a big business for non-rights holders like network ESPN, Ross said. The network devotes hours of programming about the tournament and its online pools — free to enter but with gift prizes to winners — is a huge driver of web traffic.

The network touts its pool as the most popular with 11 million brackets entered last year, an increase of 35% from 2013. Unless gambling become legal on a large scale like it is in the United Kingdom and Australia, it will remain difficult to get a clear economic picture of wagering on events like the NCAA tournament, Ross said.

“This is sort of like studies on adultery,” he added. “They’re really hard to do.”