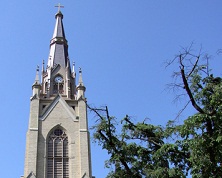 By John Stonestreet | Not Taking ‘Yes’ For an Answer | For the past fifteen years, gay students at Notre Dame, the premiere Catholic university in the United States, have been asking for some kind of official recognition from university officials.

Well, they recently got that recognition, and it shouldn’t surprise us that they are having trouble taking “yes” for an answer.

In early December, the university announced what it called a “A Pastoral Plan for the Support and Holistic Development of GLBTQ and Heterosexual Students at the University of Notre Dame.” (In case you’re wondering, the “Q” in “GLBTQ” stands for “questioning.”)

Now, recognizing that there are gay students at Notre Dame and acknowledging their particular needs isn’t the same thing as granting them a sexual carte blanche. Any approach to the issue had to be “grounded fundamentally in [the university’s] Catholic mission,” according to the vice-president for student affairs, Erin Hoffman Harding.

Thus, in keeping with that Catholic mission, the plan “calls all Notre Dame students, regardless of their sexual orientation or gender identity, to the disciplined development of the theological virtue of charity, the cardinal virtue of justice, and the moral virtue of chastity in lives of self‐giving love.”

To put it mildly, this isn’t the kind of recognition gay rights advocates had in mind. The liberal think tank, Think Progress, called this position “troubling” and a “lateral move from ignoring [gay students] to condemning them.”

And that, of course, just is nonsense. Notre Dame isn’t condemning LGTBQs. It’s treating them the same way it treats straight students.

At the same time that Notre Dame was announcing its plan, journalist Mark Ambinder, who is gay, asked “will promiscuity define young gays forever?” While he doesn’t “think so,” he also thinks that “society will become more tolerant of what might be called dignified promiscuity.” Yes you heard that right, “dignified promiscuity.”

It’s difficult to imagine a clearer example of the centrality of the sexual act to the gay worldview than the phrase “dignified promiscuity.” The benefit of the tolerance he describes is that, in Ambinder’s words, it “allows for a more interesting sex life.”

As Alan Jacobs of Wheaton College pointed out, Ambinder simply assumes that one’s sex life is supposed to be “interesting,” and that “interesting” is the result of “variety” and “novelty” when it comes to sex partners.

Of course, as Jacobs notes, “there comes a point when novelty becomes not exciting but arithmetical.” All that variety leaves you bored and feeling empty, which is why, as he writes, “the long-faithful couple know a few things about what’s truly interesting that the promiscuous could never guess.”

Ambinder’s exaltation of an “interesting” sex life is hardly unique, and it isn’t the first time a prominent gay writer has spoken about the difference between what you and I call “monogamy” and what he means by that word. For instance, sex-advice columnist Dan Savage, who recently married his partner in Seattle, has been very up-front in his rejection of monogamy in marriage.

For Catholics, as well as Protestants, the sexual act—as distinct from orientation—is ordered to certain ends: for the procreation of children, for the mutual and exclusive gift of self of husband and wife. Chastity, then, is the exercise of our sexual gifts in furtherance of those ends. If you believe that sex is an end in itself, then chastity literally makes no sense, and all that matters is whether it’s “interesting.”

Thus, it shouldn’t surprise us that the kind of recognition that Notre Dame is offering does not satisfy gay rights activists—the real surprise would be if it did.