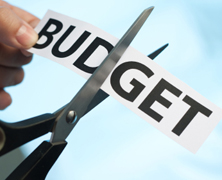 By Scott Rasmussen | To borrow a phrase, Mainstream America and Washington’s Political Class have become two nations separated by a common language.

This gap was highlighted by a recent Pew Research Center poll showing that “for 18 of 19 programs tested, majorities want either to increase spending or maintain it at current levels.”

On the surface, those results appear to support the Political Class conceit that voters like spending cuts in the abstract but not in specific programs. That’s the way it was reported by most media outlets.

But the reality is quite different. The Pew results actually show support for what official Washington would consider massive spending cuts.

Just to be clear, there is absolutely nothing wrong with the Pew poll questions or results. The raw numbers are similar to what we find at Rasmussen Reports. The problem is with the way the numbers were reported.

The Political Class, on the other hand, would consider holding spending unchanged at current levels to be a massive spending cut. Why? Because it wouldn’t allow for the trillion dollar spending growth that is already built into the budget.

With this understanding, the numbers from Pew take on an entirely different tone. Consider the Pew numbers for roads and infrastructure projects: 38 percent want more spending, and only 17 percent favor a spending cut. But a plurality (43 percent) wants to hold infrastructure spending steady. Since the Political Class would consider holding spending steady to be a “cut” in spending, 60 percent in the Pew poll favors what official Washington calls cuts.

It’s worth noting that when you get to specific spending cuts, public support is even higher than it is for cutting abstract categories like “infrastructure.” Most voters, for example, want to stop subsidies for Amtrak and are ready to freeze highway spending until the economy is stronger.

Using this understanding, the Pew data shows that voters prefer what the politicians call budget cuts in 17 out of 19 programs.

Some in the Political Class may simply be confused themselves. Others, however, are being intentionally deceptive. They are more interested in protecting government spending than in representing the American people.

Clearly, it would be a challenge to hold federal spending constant when so much growth is already baked into the budget for future years. Fortunately, though, as highlighted in my book “The People’s Money,” the American people are willing to support specific cuts when reasonable alternatives are presented.

So when politicians claim that sound polling data like the Pew study shows a lack of public support for spending cuts, they’re either wrong or deliberately trying to deceive us. Voters shouldn’t need a translator to understand what the Political Class is saying. But those in the Political Class bubble just don’t speak plain English anymore.