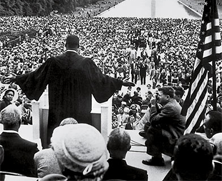 By Chuck Colson | The Good Society and the Moral Law. More than forty years ago, on August 28, 1963, a quarter million people gathered in front of the Lincoln Memorial. They marched here for the cause of civil rights. And that day they heard Martin Luther King Jr. deliver his famous “I Have a Dream” speech, a speech in which he challenged America to fulfill her promise.

“I have a dream,” he said, “that one day this nation will rise up and live out the true meaning of its creed. ‘We hold these truths to be self-evident that all men are created equal.’ ”

While we know of the speech, most people are unaware that King also penned one of the most eloquent defenses of the moral law: the law that formed the basis for his speech, for the civil rights movement, and for all of the law, for that matter.

In the spring of 1963, King was arrested for leading a series of massive non-violent protests against the segregated lunch counters and discriminatory hiring practices rampant in Birmingham, Alabama. While in jail, King received a letter from eight Alabama ministers. They agreed with his goals, but they thought that he should call off the demonstrations and obey the law.

King explained why he disagreed in his famous Letter from a Birmingham Jail. “One might well ask,” he wrote, “how can you advocate breaking some laws and obeying others?” The answer “is found in the fact that there are two kinds of laws: just laws … and unjust laws. One has not only a legal but a moral responsibility to obey just laws,” King said, “but conversely, one has a moral responsibility to disobey unjust laws.”

This is the great issue today in the public square: Is the law rooted in truth? Is it transcendent, immutable, and morally binding? Or is it, as liberal interpreters argue, simply whatever courts say it is? Do we discover the law, or do we create it?

King’s dream was to live in harmony with the moral law as God established it. So this Martin Luther King Day, reflect on that dream—for it is worthy of our aspirations, our hard work, and the same commitment Dr. King showed.