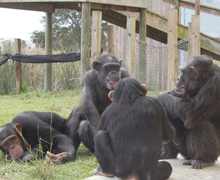 By Brandon Keim | Can a chimpanzee be considered a legal person? Not for now, a judge ruled this morning in Niagara County, New York, but the legal arguments are just beginning.

The hearing, conducted over the phone by Judge Ralph A. Boniello, III and attorneys from the Nonhuman Rights Project, a group that supports legal rights for chimpanzees, ended in the judge’s denial of a habeas corpus writ for a 26-year-old chimp named Kiko.

Had the writ been granted, Kiko’s owners would have been ordered to appear in court and justify his detainment, thus opening the door to consideration of something unprecedented in American history: the possibility of legal personhood for a non-human animal.

Image: Save the Chimps

Judge Boniello’s was the third rejection of the Nonhuman Rights Project’s three lawsuits, filed last week on behalf of Kiko, who is owned by a couple living in nearby Niagara Falls; a chimpanzee named Tommy, who is kept alone in a warehouse in Gloversville, New York; and two Stony Brook University research chimps named Leo and Hercules. All the decisions will be appealed, with appellate court hearings expected in 2014.

“Judges are busy people. They may not have the time or energy or inclination to begin to grasp this the first or second or even fifth time around,” said Steve Wise, the Nonhuman Rights Project’s founder and lead attorney. “But I think eventually they will grasp it, and see the power of the facts and the legal arguments we’re presenting.”

Each of the lawsuits claims that chimpanzees deserve to be granted rights of bodily liberty historically reserved for humans. Chimps don’t deserve full human rights, argues Wise, but they are persons with a right not be owned or imprisoned. Under the law now, they are — like every other non-human animal — a legal thing, an object of property.

Judge Boniello, recalled Wise, said “that ‘I’m not going to be the one to make that leap of faith.’” Yet Boniello, who decided that chimpanzee personhood is ultimately a matter for legislatures to decide, was also unexpectedly sympathetic, calling their arguments sound and wishing them luck. “I’ve been in a lot of cases, and there’s not been many where the judge says, ‘Good luck.’ Usually they just say, ‘Denied. Now leave,” said Wise.

Judge Joseph Sise, who heard Tommy’s case, was also sympathetic. “I will be available as the judge for any other lawsuit to right any wrongs that are done to this chimpanzee because I understand what you’re saying,” said Sise in a hearing transcript provided to WIRED. “You make a very strong argument” — but article 70 of New York’s legal code, which guides habeas corpus decisions, just didn’t include chimps.

In contrast, Judge Gerard Asher denied habeas corpus to the Stony Brook University chimpanzees within a few hours of the claim’s submission, and without holding a hearing, said Wise.

None of the judges, said Wise, seemed to have read affidavits submitted on behalf of the Nonhuman Rights Project by nine of the world’s leading primatologists. These describe, in exhaustive detail, decades of research showing chimpanzees to be highly intelligent, self-aware, and cognitively complex. In humans these same attributes are considered grounds for autonomy, a principle our society holds dear and that Wise argues is grounds for personhood.

Such research convinced the National Institutes of Health to abandon most of its own experiments on chimps. Humanity’s closest living relative doesn’t experience the world exactly as we do, but they’re similar in deeply meaningful ways. “The scientific weight of evidence is very much on the side of the plaintiffs,” said Jaak Panksepp, a neuroscientist and animal intelligence expert at Washington State University, who is not involved with the Nonhuman Rights Project.

Whether the science is grounds for personhood, however, is a different matter, said Panksepp. Wise hopes that discussion will be held in appeals courts, and said that the three habeas corpus denials were in some ways ideal: they were made on substantive grounds, rather than arcane points of procedure or jurisdiction.

As a consequence, said Wise, when the case goes to appeal, they’ll be arguing its essence rather than legal fine print. Appeals courts may reject the Nonhuman Rights Project’s arguments, but they’ll hear them — and their science — in full.

“The crux of our cases depends on judges reading and thinking about what’s presented before them. I don’t think that’s happened yet. And that’s what we’re hoping from the appellate court,” said Wise. “We will be very disappointed if appellate court judges have not read and absorbed that. They’re our main targets.”

No matter what courts eventually decide, said Paul Waldau, who teaches animal law and ethics at Harvard Law School, the cases are landmarks: rather than challenging our laws, Wise has sought to expand them, constructing a case both morally imaginative and legally rigorous. “It’s an absolutely important juncture in history,” Waldau said.

According to Wise, the Nonhuman Rights Project is now considering their appeals and other cases they might file. Possible plaintiffs include not only chimpanzees, but conceivably other great apes, some whales and dolphins, and elephants.

“This is not the end. It’s not even the beginning of the end,” Wise said, quoting one of Winston Churchill’s famous World War II speeches. “But it is perhaps the end of the beginning.”

Free Think University explores the nature of man and other animals in its course, “Are Humans Just Animals?” which came out this past week.  Sign in to the class here.