Is This the ENDA of Religious Liberty? 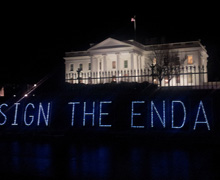 By John Stonestreet | We’re all against discrimination, so why should anyone be against the Employment Non-Discrimination Act?

On Monday, the Employment Non-Discrimination Act, or ENDA, passed the US Senate. ENDA would make it illegal for organizations or companies with at least fifteen employees, to fire, refuse to hire, or discriminate against anyone “because of such individual’s actual or perceived sexual orientation or gender identity.”

That sounds fair, right? Well, most Americans think so. One poll found that three out of four likely voters support protecting LGBT people from employment discrimination.

But ENDA, while trying to protect employees, is anything but fair to employers—especially those with religious convictions.

ENDA’s proponents will remind us that legal steps had to be taken to prevent systematic discrimination of African-Americans. But there’s a world of difference here, as Ryan Anderson, writing in National Review, clarifies.

In the Jim Crow South, there were “pervasive, onerous, and legally enshrined obstacles to employment based on race.” That’s not the case with sexual orientation in today’s America. In fact, 88 percent of Fortune 500 companies already have company policies prohibiting employment decisions based on sexual orientation.

Also, one’s race is based on objective criteria. Sexual orientation, particularly in the wording of this bad law, isn’t. It’s subjective, based on personal perception or feelings. While the scientific, psychological, and moral basis of sexual orientation is far from settled, this law acts as if it is, and forces employers to agree.

And there would be consequences. What about restroom use? What about children  who would be forced into this world of sex change and orientation because of a choice made by their teachers?

Not to mention, ENDA is a gold mine for trial lawyers to file claims of discrimination against employers, who will lose the ability to run their businesses according to their deeply held religious convictions.

As Andrew Walker of the Southern Baptist Convention’s Ethics & Religious Liberty Commission points out, ENDA is so broad that something as simple as an employer placing a Bible on his desk could be prohibited, lest, as the law states, the action would “adversely affect the status of the individual as an employee.”

Supporters of ENDA, of course, will point out the law’s exemption for religious institutions. But those exemptions are unclear, and certainly do not exempt religious business owners from running their business on religious principles.

As Chuck Colson warned us time and time again, the concept of freedom of religion is being constricted to freedom of worship. That lamentable trend is certainly evident when it comes to ENDA, which says you can believe whatever you want about human sexuality and even preach it from your pulpit—but you just can’t act on it, at least not in the “real world.”

So increasingly, the scriptural and physically obvious understanding of male and female, affirmed for millennia by millions and millions of people of good will, is now seen as simple bigotry. More and more, the power of the state is being marshaled to enforce one worldview and suppress others. Now I don’t mean to be alarmist, but we should be concerned.

So is ENDA the end of religious freedom in America? Perhaps not, but it is anything but the benign vehicle ending workplace discrimination that it claims to be.