Is the Welfare State Helping the Poor? 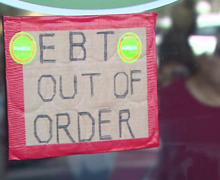 By S.M. | OPPONENTS of America’s welfare state tend to make two kinds of arguments. The first, that of philosophical libertarians, regards food stamps, housing supports and unemployment payments as unjust transfers from some citizens to others. The second, less doctrinaire and more in vogue, holds that welfare programmes do not benefit their intended recipients.

A new study led by Christopher Wimer and Liana Fox, researchers at Columbia University, calls the second claim into question. The safety net, they say, has saved millions of Americans from falling into poverty over the past four decades. Why are we just learning about this now? Well, it turns out we’ve been using bad statistics. “[S]tatistics using the official poverty measure do not provide an accurate picture of poverty or the role of government policies in combating poverty,” say the authors. The Census Bureau corrected this in 2010 by adopting a new measure that takes fuller account of nutrition and housing payments, means-tested transfers and social insurance programmes on one side of the ledger, and taxes on the other. Using similar methods, the authors recalculated poverty figures for the period of 1967-2010 and concluded:

[Using the old stats] poverty rates would have actually increased slightly over the time period, from 27% to nearly 29%. But after accounting for taxes and transfers, poverty falls by approximately 40%, from 26% to 16%. The figure also shows the growing anti-poverty role of taxes and transfers in reducing poverty, from only about 1 percentage point in 1967 to nearly 13 percentage points in 2012.

Bringing down poverty by 40% is a big deal, and as Kevin Drum notes, the fact that poverty only ticked up slightly since the economy tanked in 2008 shows that the safety net has“significantly ameliorated a human catastrophe over the past five years.” According to the Columbia study, welfare programmes have also made a significant dent in child poverty and in “deep poverty”, the percentage of the population earning under 50% of the poverty line. Rates of deep poverty were around 5% for most of the period, but would have been triple or quadruple that figure without the welfare programmes.

Those impressive figures, Mr Drum argues, should not obscure a less sunny result: the stubbornly high proportion of working-age poor people in America. While poverty among the elderly has fallen impressively since 1967 (around the time Medicare was introduced), the percentage of poor Americans aged 18-64 hasn’t budged much. The figure dipped from 1967 to 1979, but today is right back where it was 35 years ago, at 15%.

Arnold Ahlert jumps on that piece of Mr Drum’s analysis to argue that social welfare programmes disincentivise work and entrench, rather than alleviate, poverty. The figures “paint a damning picture of leftist re-distribution schemes”, he writes:

[T]he largest decrease in the percentage of poor Americans occurred before LBJ’s War on Poverty began. From 1950 to the late 1960s, Census Bureau data show the poverty rate in a dramatic decline. Immediately after LBJ’s “Great Society” programs kicked into gear, the poverty rate began to stagnate. And it has more or less stagnated ever since, despite trillions of dollars of government spending on means-tested programs.

Mr Ahlert cites a recent study by the Cato Institute that contends the welfare system is so generous that it disincentives work. “Welfare currently pays more than a minimum-wage job in 35 states, even after accounting for the Earned Income Tax Credit, and in 13 states it pays more than $15 per hour,” write Michael Tanner and Charles Hughes, the authors.

The study is flawed: many of the welfare benefits Messrs Tanner and Hughes criticise are also available to the working poor, undercutting the claim that the safety net entangles people in perpetual joblessness. And few families receive all of the benefits laid out in the study. But real-world reporting bears out what common sense suggests: welfare benefits will dampen some recipients’ drive to seek employment, whether they are technically impoverished or not.

The counterfactual estimates at the heart of the Columbia study thus mask a good deal of uncertainty. When the authors conclude that “without taxes and other government programs” official poverty rates would be nearly double what they are today, they take no account of the altered climate of expectations and incentives that a reduction of the welfare state would have created. That is, they assume that poor people would make precisely the same decisions and wind up with precisely the same level of market income had the government abandoned food stamps, housing supports and unemployment insurance. This is a big assumption. There is no reliable way to model such hypotheticals, and therefore no way to know with any certainty how many people’s lives would have been devastated by a cut in benefits and how many might have responded by working harder to gain employment.

The Columbia study also says nothing about how far above the poverty line America’s welfare state is bringing those who may otherwise end up poor (assuming, for a moment, that we trust the counterfactual analysis). If reducing poverty just amounts to ushering Americans to a somewhat less meagre existence, it may be a worthwhile endeavour but is hardly satisfying. The objective, of course, should be a system of benefits that encourages people to work their way out of penury, and an economy that does not result in so many people needing welfare in the first place. Any praise for the efficacy of safety nets must be tempered by the realisation that, for one reason or another, these folks could not make it on their own.

FTU Note:  If you found this topic engaging, look for our new course on Is Prosperity Good? coming out tomorrow, Dec. 31, 2013.  It looks at aspects of this issue in depth.