Is the Job Outlook and Employment Improving? 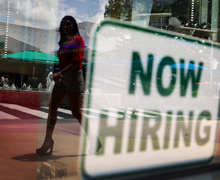 By Neil Irwin | If you only looked at the headlines on Friday’s August jobs numbers, you’d think “Not bad!”

You would also be completely wrong.

Yes, the unemployment rate fell a notch to 7.3 percent, from 7.4 percent in July. Yes, the nation added 169,000 jobs, broadly consistent with the pattern of recent months.

But in almost all the particulars, you can find signs that this job market is weaker than it appeared just a few months ago, and maybe getting worse. The drop in the unemployment rate was caused by 312,000 people dropping out of the labor force. The number of people actually reporting having a job actually fell by 115,000 in the survey on which the unemployment rate is based.

And while the overall August jobs number was okay, the Labor Department revised down its estimates of June and July job creation by a combined 74,000 positions. In other words, through the summer, hiring has been quite a bit shakier than it had appeared.

Jobs numbers ebb and jobs numbers flow, and as always, it would be unwise to make too much of one report. But this one has enough signs of weakness embedded in enough places that it has to make economy-watchers — including those at the Federal Reserve who meet in less than two weeks — reassess their confidence that a solid, steady jobs recovery is underway.

Consider this: The nation has averaged 148,000 new jobs a month for the last three months. The number was 160,000 for the last six months, and 184,000 a month over the last year. That looks to me like a downward trend, no two ways about it. It’s certainly not the gradual acceleration that most mainstream economists have forecast as 2013 advances and the impact of tighter fiscal policy fades.

Want another sign? The proportion of the U.S. population that had a job in August was 58.6 percent. Six months earlier, the number was a whopping — wait for it — 58.6 percent. The year is nearly three-quarters over, and the economy isn’t growing fast enough to put a higher proportion of its citizens back to work.

You don’t have to squint hard to see evidence that the “nice, steady improvement” theme that has been the conventional wisdom is missing part of the story.

That is particularly relevant for Chairman Ben Bernanke and his colleagues at the Fed. The central bank has been expected to start pulling back on the pace of its $85 billion-a-month in bond purchases at its meeting Sept. 17-18. The Fed’s entire plan for winding down its “QE” policies, which it planned to conclude in the middle of next year, has been dependent on steady improvement in the jobs market.

That such a jobs recovery may not materialize has to make them at least think twice, maybe three times, about pulling the trigger on the so-called taper at this policy committee meeting. Adding to the case for waiting is a looming fiscal standoff and rising oil prices set off by the conflict in Syria, which is heightening geopolitical worries.

This report may not be definitive, but it’s enough to spur a reassessment of how robust this recovery is, and how much confidence any of us have in that view.