Insights on the Government Shutdown from Thucydides 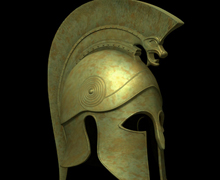 By Robert M. Woods | “And if we should know what government is, we should observe, in Thucydides’ laconic account of the revolution at Corcyra, what happens when it fails.” – Stringfellow Barr

Most keen observers would say that our government has been in failure mode for a number of decades, and this is not easily refuted on empirical grounds. Readers of the Great Books might suggest we begin not with Thucydides, but with Plato and Aristotle. One should not quibble over such matters. Instead, go now, and get a copy of Thucydides’ The History of the Peloponnesian Wars. Turn and read Book III, Chapter X. The only immediate background needed is this: The time and place of the revolution is at Corcyra in the fifth year of the Peloponnesian War. We find ourselves in a trial of sorts.

Thucydides describes a world where words have little to no meaning. With the collapse of communication, so comes the collapse of community. The spiral from order to chaos is inevitable. It is clear from Thucydides that events leading up to and the consequences following a revolution cast a dark shadow on human endeavors. The specific results of the Corcyraean revolution were famine and ongoing civil strife.

The careful reader is held from the powerful opening when the Plataeans plead with extraordinary rhetorical flare to the Lacedaemonians to the line which concludes, “Such were the words of the Plataeans. The Thebans, afraid that the Lacedaemonians might be moved by what they had heard, came forward and said that they too desired to address them, since the Plataeans had, against their wish, been allowed to speak at length instead of being confined to a simple answer to the question.” (Thucydides, 3.60.1)

Rhetoric and pragmatism is in high form throughout this event. Thucydides speaks of politics as backroom bargains, and all the scheming motivated by the pragmatic. What was absent then and absent today is statesmanship which was dismissed so brute force could be enacted and people could be executed.

“The cause of all these evils was the lust for power arising from greed and ambition; and from these passions proceeded the violence of parties once engaged in contention. The leaders in the cities made the fairest professions: on the one side with the cry of political equality of the people, on the other of a moderate aristocracy; but they sought prizes for themselves in those public interests which they pretended to cherish and, stopping at nothing in their struggles for ascendancy, engaged in direct excesses. In their acts of vengeance or the good of the state demanded, but making the party caprice of the moment their only standard, and invoking with equal readiness the condemnation of an unjust verdict of the authority of the strong arm to glut the animosities of the hour. Thus religion was in honor with neither party; but the use of fair phrases to arrive at guilty ends was in high reputation. Meanwhile the moderate part of the citizens perished between the two, either for not joining the quarrel, or because envy would not allow them to escape.” – Thucydides, 3.82.8

Possibly the key phrase is in reference to “the moderate part of the citizens” perishing. It is certainly a lesson of history and wise letters that the plight of the moderate is to be crushed by the extremists.

By looking at what can happen when political and social order falls below the lowest level among humans, we can take some peace, that we are not there yet. Right? Let us conclude this reflection in a different place. For Thucydides, revolutions give us insight into human nature and the loss of all important social order. It is eerie how familiar his words are considering our context.

“Thus every form of iniquity took root in the Hellenic countries by reason of the troubles. The ancient simplicity into which honor so largely entered was laughed down and disappeared; and society became divided into camps in which no man trusted his fellow. To put an end to this, there was neither promise to be depended upon, nor oath that could command respect; but all parties dwelling rather in their calculation upon the hopelessness of a permanent state of things, were more intent upon self-defense and capable of confidence. In this contest the blunter wits were more successful.” – Thucydides, 3.83.1,2

More than once, over the past few decades, I have had to defend why I stay focused on reading the Great Books when many others watch hours of news. The news, at best gives the pre-digested data of the moment according to the leanings of the source. For me, news tends toward befuddlement and poisons the soul which inhales the noxious vapors of the blind soothsayers, while wisdom, sometimes painful to embrace, sustains the human soul. The words of G.K. Chesterton seem more pertinent than ever when he spoke about democracies that are born as the result of a revolution. “You can never have a revolution in order to establish a democracy.” Here we are more than two hundred years after our revolution with the pervasive illusion that we are free, equal, and always changing for improvement.