Immigration Reform at What Cost? 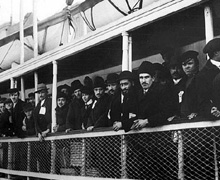 By Derrick Morgan | Lawful immigration can bring important economic and cultural benefits both to the United States and to the immigrants. Americans rightly live and celebrate the values of America, including limited government, personal liberty, and free enterprise, and beckon others to join us. We are united by belief in our founding documents and our creed that all men are created equal. As Ronald Reagan said, “The immigrants who have so enriched America include people from every race, creed, and ethnic background.”

While we welcome those who want to come here, we are a nation of laws and the rule of law requires fair, firm, and consistent enforcement. Immigration is no exception and in fact is critically important, because newcomers need to see the principle in action from their first day in America. Those who enter legally by our slow and bureaucratic system need to be rewarded, not left wondering whether they should have entered or stayed illegally and waited for amnesty.

In addressing immigration, our government should start with keeping the promises they made when they granted amnesty “for only this one time” in 1986. First, they must secure the border. Then they should enforce our laws by imposing stiff fines on those who hire illegal immigrants. These steps are supported by supermajorities of the American people.

After that, Congress should move to fix our slow, broken lawful immigration system. Individual bills addressing these specific problems step-by-step are good for the country because they are simple, clear, and transparent. They make it possible to get legislative victories where we can agree and make it hard to hide loopholes or sweetheart deals for special interests. They can build trust that government is working for the people.

Unfortunately, Congress is moving ahead with a huge, complex, and comprehensive bill that will include amnesty for those who have broken our immigration laws. And in a time of massive and increasing debt, we know that the bill will end up costing taxpayers trillions of dollars. After a short time, millions of illegal immigrants will have access to the full panoply of bloated means-tested welfare programs and qualify for overburdened entitlement programs like Social Security and Medicare.

Instead, Congress should proceed step-by-step: border security, then workplace enforcement, and then fixing our broken legal immigration system. These steps will fulfill past promises and benefit America economically while not adding the unnecessary fiscal costs of amnesty.