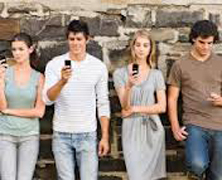 By Evan Selinger | Let’s face it: Technology and etiquette have been colliding for some time now, and things have finally boiled over if the recent spate of media criticisms is anything to go by. There’s the voicemail, not to be left unless you’re “dying.” There’s the e-mail signoff that we need to “kill.” And then there’s the observation that what was once normal — like asking someone for directions — is now considered “uncivilized.”

Cyber-savvy folks are arguing for such new etiquette rules because in an information-overloaded world, time-wasting communication is not just outdated — it’s rude. But while living according to the gospel of technological efficiency and frictionless sharing is fine as a Silicon Valley innovation ethos, it makes for a downright depressing social ethic.

People like Nick Bilton over at The New York Times Bits blog argue that norms like thank-you messages can cost more in time and efficiency than they are worth. However, such etiquette norms aren’t just about efficiency: They’re actually about building thoughtful and pro-social character.

Take my six-year-old daughter. When she looked at her new iPod Touch (a Chrismukkah gift), she saw it as a divine labor-saving device. Unlike the onerous handwritten thank-you notes she had to do for her birthday, she envisioned instead sending quick thank-you texts to friends and family. Months later, she still doesn’t understand why her parents forbid the shortcut. And she won’t. Not anytime soon.

It’s not because the old can’t learn from the young (to cite Bilton’s inversion of Margaret Mead), but because the old know something that those who speak loudly on behalf of the digital natives ignore: Relationships are fragile, and they require effort to preserve. Shortcuts won’t do; you often have to say more than just the essential facts. Viewing personal communication in overly reductive terms makes tenuous connections even more fragile.

Furthermore, appeals for technologically efficient etiquette and my daughter wanting more time to play share something else in common: the selfish desire to dictate the terms of a relationship.

My daughter wasn’t thinking about how her grandparents or aunts and uncles would feel. Likewise, while Bilton gives lip service to the fact that people can have different expectations about communication — noting some people would prefer a thank-you text to nothing, that he prefers his mother to tweet to him — his actions convey egoistic priorities. That’s why my daughter isn’t allowed to text her thank-you notes. Her mother and I are trying to combat these me-centered tendencies, which, for all the good social media can do, can be exacerbated in an “about me” / “what are you doing?” status-update world.

Now, about those thank-you notes. Yes, there’s a funny tendency for parents to make a big deal of these, like they’re telegraphing their own parenting skills. A critic might add that I’m just a Luddite who fetishizes handwriting, or who ignores how new media can convey authenticity. But others will recognize that I’m training pro-social behavior and the positive capacities it fosters, such as empathy.

And I do believe that heartfelt, authentic messages can be conveyed in many different mediums and technologies: attentive phone calls, customized digital cards with sentimental Photoshopped images, text messages with thoughtfully choreographed Vine videos, and personalized songs in mp3s are just a few examples. People should choose these and any other means as long as they’re not being quick and thoughtless. Otherwise, we’re sacrificing attention and care for the type of expediency that turns maintaining important relationships into mere to-do-list items.

At stake, then, is the idea that efficiency is the great equalizer. It turns every problem into a waste-reduction scenario, but its logic has a time and a place. Social relations are fundamentally hierarchical, and the primary way we acknowledge importance is through effort. Sending laconic thank-you texts to family treats them no differently than business associates.

In claiming that effort is the currency of care, I’m not suggesting that efficient communication only belongs to instrumental contexts. For example, I encourage my daughter to routinely send short texts to people who are important to her. After all, every exchange can’t be deep or premeditated. A spontaneous “hi” here and “how are you doing?” goes a long way to reminding others that they aren’t alone and remain in our thoughts. But if a grandparent didn’t text, I would consider it incredibly rude and lacking in sympathetic sentiment if my daughter issued an unspoken ultimatum — like Bilton did with his parents — of get-on-my-technology-platform or get frozen out.

The longstanding technological goal of enhancing efficiency serves us well in many cases. But we need to avoid prioritizing it over genuine connectivity.