How the French Are Fighting for Marriage 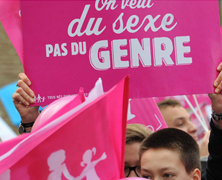 By David Azerrad | On March 26, thousands of Americans will gather in Washington, D.C., for the national March for Marriage. They’ll have to work hard to match the élan of the French, who are getting ready for their third marriage rally in Paris on the 24th.

In November, 100,000 people gathered in the French capital to protest a bill to recognize gay marriage. On January 13, Paris was blanketed in a sea of a bright pink—who said that defending marriage could not be done with a bit of flair?—as a million people stretched for half a mile in front of the Eiffel Tower, chanting “Mariageophiles, pas homophobes!” (“Marriage lovers, not homophobes!”) and “Un père, une mère, c’est élémentaire!” (“One father, one mother: It’s basic!”—which rhymes in French).

Ignoring the tidal wave of discontent, the National Assembly still passed the bill. Undeterred, the pro-marriage movement gathered 700,000 signatures in less than two weeks to demand that the impacts of the law be studied by a consultative assembly. Their request was denied, and the bill is now heading for debate in the senate.

Americans fighting for the defense of marriage here at home have much to learn from the French. The French pro-marriage movement has forced a national conversation on the redefinition of marriage. They’ve flipped public opinion on same-sex marriage: A majority is now opposed to it. And they’ve built support with the general public and attracted many people who are neither conservative nor religious.

So how did they do it?

First of all, they made this a debate about the well-being of children—not the desires of adults. “The rights of children trump the right to children,” goes a clever slogan. A popular sticker slaps “Made in Papa + Maman” on the picture of a baby. In all public pronouncements, the focus is always on the needs and rights of children.

“The right of the child is radically different from the right to the child,” explains the chief rabbi of France, Gilles Bernheim, in one of the best essays on the subject, recently translated into English. “The former right is fundamental. It consists in particular in giving the child a family in which it will have the best chance to have the best life.”

Second, they’ve put together a diverse coalition that includes not only the traditionalist and Christian groups one would expect to be opposed to gay marriage but also homosexuals, socialists, feminists, Jews, and Muslims. One of the leading spokesmen for the cause, Xavier Bongibault, is an atheist homosexual with bleached-blond hair.

“To say that homosexuals must be for this bill because they are homosexuals is to deny their existence as men and women,” he explains. “It is to say that they can only think based on their sexual orientation, and not their political conscience.”

Lastly, they’ve avoided the cardinal sin of the vacuous age we live in: stuffiness and uptightness. The government called its bill “Marriage for All,” so the marriage activists called their movement “The March for All.” Their official color is bright pink. Their slogans are clever and punchy. And their most vocal spokeswoman is a colorful character who goes by the name “Frigide Barjot” (“Crazy Frigid,” a play on the name of the famous actress Brigitte Bardot).

What the French have shown us is how to craft a rhetorically powerful message that makes clear that the marriage debate is not about homosexuality but the needs and rights of children.