Hooking Up in Shakespeare’s World 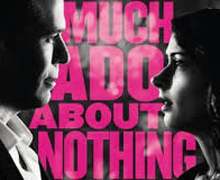 By Gina Dalfonzo | The Atlantic | Drunken One-Night Stands Don’t Fit in Shakespeare’s World, Yet Joss Whedon put one in his new adaptation of Much Ado About Nothing. Here’s why it doesn’t work.

In Joss Whedon’s otherwise delightful new update of Much Ado about Nothing, there’s one moment that jars. It’s unfortunate that it should be the opening moment of the film.

In a wordless prologue, we see Beatrice and Benedick–the two characters who will spend most of the play sparring and then falling in love–having a “morning after.” She’s in bed pretending to be asleep; he’s collecting his clothes and guiltily sneaking out the door. He never sees the silent devastation on her face.

There’s nothing new about the idea of Beatrice and Benedick having been romantically involved before the events of the play. There are hints at such a romance in the text–Beatrice remarks that Benedick once “lent” her his heart–and Whedon is not the first director to make use of those hints.

What is new, to the best of my knowledge, is the suggestion that this romance was consummated before marriage. This change is more significant than many of our 21st-century minds might at first believe. After all, a viewer might reason, this version has cell phones and cars and cupcake stands; why shouldn’t it have premarital sex as well? The vast majority of this generation is just fine with it, after all, according to recent statistics from the CDC.

I can think of a few reasons why a one-night stand doesn’t fit in even a “modernized” version of Much Ado. For a start, the plot of the play still turns on a character, Beatrice’s cousin Hero, being falsely accused of promiscuity. The fallout from the accusation is swift and brutal: Her fiancé, Claudio, leaves her at the altar, telling her father, “Give not this rotten orange to your friend.” Her father, in his turn, declares that he’d rather see her dead than “tainted” in this way. A furious Beatrice, one of the very few to stand by Hero, insists that Benedick challenge Claudio to a duel. After the truth has been discovered and a repentant Claudio reunited with Hero, she declares publicly, “And surely as I live, I am a maid” (that is, a virgin). This is clearly a society that values pre-marital purity, at least for women.

However one feels about such a society, given that the Hero-Claudio storyline is still intact, Beatrice and Benedick’s affair makes little sense. Flashbacks in the film, in fact, signal that it was little more than a hookup, aided by copious amounts of alcohol. That is even more incongruous in a setting in which Hero’s chastity still matters so much. Hero’s father hints at one point that an already-engaged couple yielding to temptation wouldn’t be such a grave offense. But a drunken one-night stand–that would have gone against everything that Beatrice had ever been taught.

It also goes against the bulk of what Shakespeare wrote about casual sex. As Anthony Esolen has pointed out, “For Shakespeare, chastity is as near to an absolute value as it is possible for a virtue to be.” Considering Shakespeare’s work against the backdrop of pagan and Renaissance poets, Esolen continues, “Nothing in Shakespeare corresponds to the reveling in sensuality that we find in these poets…and that is all the more remarkable given his earthiness and bawdy humor.”

There are other problems with Beatrice and Benedick’s tryst. In an Atlantic interview, Whedon explains that his interpretation is meant to be about “the vulnerability of two people who had opened themselves up to something, but were not ready for it, ran away from it, and then blamed each other.” Regardless of his intentions, that’s not how the scene comes across on the screen. It appears that only one person (Benedick) is doing the running away, leaving the other person (Beatrice) deeply wounded.

As a trigger for the invective that Beatrice and Benedick will hurl at each other later in the story, this imbalance doesn’t work. Shakespeare’s text does suggest that Beatrice has been hurt to some extent, but that she is primarily a “merry” and not a “melancholy” person; she’s having fun exercising her wit at Benedick’s expense. (Imagine that, from a pre-feminist writer like Shakespeare!) The fact that she hasn’t been seriously wounded by Benedick makes it plausible that she could so easily fall in love with him later, and so willingly drop the rhetorical weapons she’s been wielding against him.

Weighed down with the emotional baggage that Whedon gives her, the Beatrice we see in the movie seems far too quick to forgive a great offense without ever having received an apology. The Benedick of the film was genuinely unkind when he broke things off without a word after their night together, brief and drunken as it was, and he is never truly held accountable for it. Their happy ending, though enjoyable to watch, is achieved with an ease that seems more than a little artificial.

Not to mention that Whedon’s Beatrice still refers to herself as a “maiden,” just as Hero does. Why Whedon decided to leave that word there is anybody’s guess–he surely can’t have thought it would fly right over the heads of a movie audience comfortable enough with Shakespearean dialogue to commit to listening to two hours’ worth of it. He can’t be suggesting that the word has no real meaning at all: That wouldn’t jibe with Hero’s story, and the values that have been shown as being important to this community. Is he suggesting Beatrice is a liar, or a hypocrite, or that she simply can’t admit that she went against her community’s standards? If any of these is the case, she ought to be even more troubled and ambiguous a character than Whedon has already made her.

The references to “maiden” do serve one purpose, however: They demonstrate the fact that modern sexual standards are a much more awkward fit with Shakespeare than modern cell phones.