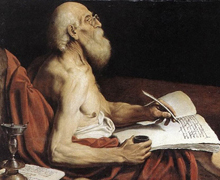 We’ve all heard it—life is far easier now than “back in the day” when our grandparents were young. I admit, those words may contain some degree of truth; at school, research no longer requires laborious pilgrimages to musty library crypts, and I shall never relinquish my laptop for a Remington typewriter. Rejoice! Life is improving with time, and we are the fortunate beneficiaries.

However, this trend toward ease is apparently not confined to the technological realm. A recent study by Renaissance Learning has compared high school required readings from 1907 to 2012, claiming that such texts have steadily lost complexity and become simpler over time.

Although our analysis is restricted to the period of 1907 to 2012, there is evidence that writing has become less complex … Complexity is impacted in part by average sentence length; books with longer sentences tend to be more difficult to comprehend than books with shorter sentences … Our point in presenting this overview is not to imply that the books students are assigned today are less valuable than those assigned decades ago. That being said, there exists a legitimate debate among educators regarding whether or not students are being adequately prepared for the challenges of college and career.

I found this somewhat concerning, so I examined the study’s book lists. To my dismay, I discovered that such books as The Hunger Games and Twilight have made the top 40 assigned readings of today, yet my beloved David Copperfield is nowhere to be seen. Classics have become less common, and the contemporary texts appear to be less challenging reads.

Needless to say, I went through a minor depression last night. Do some high schools actually believe that Twilight is more valuable than Antigone? On the other hand, had I been needlessly tortured by reading The Vicar of Wakefield? After comforting myself with ice cream and an episode of Psych, I was reassured that my efforts had not been wholly in vain. Rather, some high schools may need to reassess.

Some may argue that a given book’s style does not dictate its inherent literary worth. This is true in many cases; for instance, Pope Francis has become well-known for his succinctly accessible theological remarks. Additionally, while The Help may be written in simpler language than that used by Dickens, its moral weight is nonetheless undiminished.

That being said, if formation is indeed the purpose of education, to stretch limits and stimulate intellectual growth, then students must be genuinely challenged. How can we fairly expect high school graduates to possess the sharpened reading and writing skills necessary for collegiate success if their literary experience has been characterized by books made popular through movie-adaptations? The Lightning Thief will not sufficiently prepare one to read (much less appreciate) Homer or Dante in a college-level humanities classes, nor should it.

Hope is certainly not lost, course corrections can still be made. There are several private schools adopting classical texts within their curricula, producing very interesting results. Yet until such changes are made on a large scale, many high schools will continue watering down education at students’ expense.