‘He Named Me Malala’ – A Movie Review 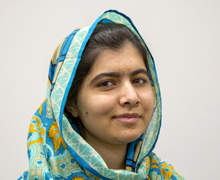 When the world sees a teenager rooting for change, they are moved by the very effort. But sometimes they (the world) ends up ignoring what’s gone behind bringing about that change. We forget how this person is also a human being like any of us, except he/she believes and hopes a little more.

The story of Malala Yousafzai is unique, inspiring & moving and He Named Me Malala does justice to her story. It may just inspire a few souls to join her cause of making education possible for the girl child across the globe. The film takes a peak into the other side of her story; her personal space, the relationship she shares with her father and shows us what drove her to bring about the change she intends to, in the world.

Davis Guggenheim (of An Inconvenient Truth fame), the Oscar winning documentary director, proves his worth and shows us what a good documentary is made of. With animation tracing Malala’s past life and her family’s history, he encapsulates Wat (a suburban village of Pakistan), Malala’s hometown, with utter care. A documentary made on a topic that includes the terrorist group Taliban must be handled with care and should remain unbiased and Guggenheim with his imagery manages to pull that off with ease. 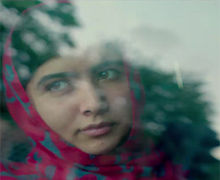 A still from He Named Me Malala. Image from Facebook.

The documentary starts with Malala explaining what her name means and how ‘Malalai’ – the historic character who ventured out to turn the Afghan army to march in the opposite direction was later killed, when she was shot in the head by someone who didn’t believe in her cause. It’s interesting how the director has chosen to begin the tale of this documentary in that fashion, because it resonates with Malala’s story, except only, Malala survived after she was shot in the head by the Taliban and Malalai didn’t.

What’s sad is that this tale doesn’t focus on the cause Malala is fighting for, instead shows us snippets of her personal life, quirks us with her brothers as they describe her and shows us what a father-daughter bond that includes learning can do.

You feel like going into applause by the end, as the movie declares her as a Nobel peace Prize winner (Shared with Kailash Satyarthi, in the year 2014) but we wonder what the filmmaker wants us to sympathize with – the story of the girl or the cause she is fighting for?

It is one of those documentaries that is a must-watch, since the world needs to start caring about the education of the girl child, but that being said it’s also important to mentally equalise between the cause that Malala is fighting for as you empathize with her own story.

‘He Named Me Malala’ review: This intense film reveals the personal side of a public persona