Has Christianity Been a Driving Force in the Spread Of Democracy?

By Greg Scandlen | Protestant missionaries played an integral role in spreading democracy throughout the world. We could preserve our own if we learn from their ways.

It has long been evident to me that the most successful societies in the world are former British colonies – the United States, Canada, Australia, New Zealand, Hong Kong, Singapore, and to a lesser extent India and South Africa. I have usually attributed this to the British embrace of capitalism, merit-based civil service, and widespread education.

As long as these nations followed that model they prospered, but when they went off the tracks and experimented with socialism (as India did for a while) or dictatorship (as Zimbabwe, formerly Rhodesia, is still doing) they failed. 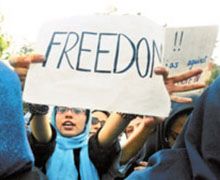 Now comes Robert Woodberry of the National University of Singapore to argue that I have missed the point. In 2012, The American Political Science Review published a breathtaking article by him, “The Missionary Roots of Liberal Democracy.” I say breathtaking because of the comprehensive statistical analysis underlying his argument. He doesn’t just correlate missions with democracy, but he accounts for most other plausible explanations and he looks at conditions in Europe, North America, Latin America, Asia, Africa and Oceana, and also considers regional differences within many of these countries.

What Woodberry finds is that wherever “conversionary Protestant” (CP) missionaries went, they laid the roots for modern democracy. Often, but not always, these were associated with British colonies. There were British colonies that had few missionaries and these areas were not especially well equipped for democracy, but when missionaries went to places untouched by the British, they had the same democratizing effects.

As we have seen with recent efforts in the Middle East, democracy is far more than a matter of elections. There are underlying conditions that must be met before democratization can succeed. Woodberry writes:

“… conversionary Protestants were a crucial catalyst initiating the development and spread of religious liberty, mass education, mass printing, newspapers, voluntary associations, most major colonial reforms, and the codification of legal protections for nonwhites in the nineteenth and early twentieth centuries. These innovations fostered conditions that made stable representative democracy more likely – regardless of whether many people converted to Protestantism.”

The presence of missionaries who respected indigenous people enough to find them worthy of conversion created the right conditions for democracy.

He goes on to explain that fundamental to the beliefs of Protestants is the idea that people should be able to read the Bible for themselves. This was much less true for Catholics prior to the twentieth century. This one factor lead to a number of missionary activities, including helping indigenous people develop a written language (for the first time ever in some cases), printing Bibles and religious tracts in local languages, setting up schools to teach people how to read, and organizing non-governmental (and often non-religious) associations. They also worked to reform abusive colonial governments—especially in the British colonies, where they had more influence.

None of this is to say that all Protestants were kind or enlightened:

“Of course, Protestant economic and political elites were as selfish as anyone else. Protestant slave owners fought slave literacy, and Protestant settlers exploited indigenous people: however when missionaries were financially independent of the state, of slave owners, and of white settlers, missionaries undermined these elite co-religionists in ways that fostered democracy.”

So it wasn’t Protestantism per se that created the right conditions for democracy, but the presence of missionaries who respected indigenous people enough to find them worthy of conversion. Woodberry explains:

As Information Spreads, So Does Democracy

Today we may think of missions as mere footnotes in the historical sweep of economics and ideology, but Woodberry argues that prior to the mid-twentieth century, “missionaries were the main source of information about life in the colonies.” They were well educated and dwarfed the presence of other organizations such as labor unions and NGOs. They had financial resources that were greater than all but the largest commercial banks.

Their interest in printing and distributing Bibles and other religious tracts largely drove the growth of printing throughout the Western world. In the 19th century, for instance, Bible societies were among the largest corporations of any kind. The American Bible Society printed and distributed over one million Bibles between 1829 and 1831, at a time when the total number of households in the United States was only about three million. Woodberry continues:

“CPs printed so many vernacular texts that it forced (indigenous) elites to respond. For example, within 32 years of importing a press to India in 1800, three British missionaries printed more than 212,000 copies of books in 40 languages and, along with other missionaries, created the fonts and paper that dominated South Asian printing for much of the nineteenth century.”

Protestant missions retained a level of independence from colonial rulers that made it possible for them to actively oppose abuses in several important ways.

He notes that the availability of printing itself was not sufficient reason for the creation of mass literacy and newspapers. China, Korea and Japan all had printing hundreds of years before Europe, they had moveable metal type long before the Europeans and thriving mercantile classes, but literacy was largely confined to the elite and newspapers never developed before the arrival of missionaries in the nineteenth century.

Wherever the missionaries went, they started schools for mass education of indigenous people, often against the wishes of white colonizers. They also imported the organizational models and tactics they developed during the movements for abolition, temperance, and other social reforms to third world countries in the 1800s.

Finally, the Protestant missions were mostly not sponsored by the state. This gave them a level of independence from colonial rulers that made it possible for them to actively oppose abuses in several important ways, especially in British colonies. The missions were financed by a broad mass of the faithful back home. These supporters could be mobilized to lobby parliament against abusive colonial governors. The missionaries generally came from reformist traditions back home and could apply those lessons with indigenous people, and the missionaries realized that colonial abuses made religious conversion much harder. As a result, wherever missionaries were most active, the colonial governments were pressed to curtail forced labor, apply similar legal standards to whites and non-whites, and allow the creation of organizations of local people.

All of this – mass printing, literacy, activism, and civic organization – created the conditions, skills and experience for local populations to better run their own affairs and participate in democratic governance independently not only of colonizers but also of the traditional elite in their own countries.

Christian Missions And The Spread Of Democracy