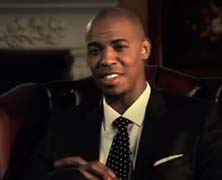 By Eric Metaxas | The online ad opens with a shot of an African American actor, Mehcad Brooks, sitting in a chair, holding a drink in one hand and a red rose in the other. And then he speaks directly to the camera.

“Oh, hey, baby, did you think I forgot? …. How could I forget our anniversary?”

The “anniversary” he’s referring to is the 40th year of Roe v. Wade, of abortion on demand. Clearly this ad thinks that this is something to celebrate. As the actor puts it, “All these years so many people said we’d never make it. They’ve been trying to tear us apart. . . Put limits on you, on me, on us.” And then he roars with laughter.

“We’re going to be standing right by your side, today, tomorrow, and the years to come,” he promises. “Because that is how much you mean to me, baby.” And again, he roars with laughter.

When I first watched this ad, I thought, this HAS to be a spoof. It employs the ugly racial stereotype of a smooth-talking predator celebrating his freedom to use women at zero cost to himself: Hey, baby, hook up with me—and then go have an abortion. Are they kidding? No; this was no spoof.

The ad was actually made by the Center for Reproductive Rights. And with this ad they’ve revealed more than they may have intended about why so many men want abortion to remain legal.

Ryan Scott Bomberger, an African-American pro-lifer who runs the Radiance Foundation, hit the nail on the head about this ad. “The Center for Reproductive Rights, like Planned Parenthood, certainly understands its main demographic,” he notes. “The fact that they use a black man just screams irony.”

That’s because, as Bomberger says, “With the black abortion rate as high as it is and black fathers as absent as they are, it’s just sick to see Mehcad Brooks shill for the number-one killer in the black community.”

And of course, he’s right. For the black community, abortion verges on genocide. It kills more black Americans than gun violence, cancer, AIDS, and heart disease combined. Abortion businesses target minority communities because they know there’s money to be made.

This may be a big reason why black women abort their babies at five times the rate of white women, according to the Guttmacher Institute. This means that black women who abort suffer higher rates of breast and cervical cancers—both linked to abortion–and from post-abortion trauma.

“[W]hat would Martin Luther King, Jr.,” she asked, “who dreamed of having his children judged by the content of their characters, do if he’d lived to see the contents of thousands of children’s skulls emptied into the bottomless caverns of the abortionists’ pits?”

This is what the guy in this ad is celebrating: The slaughter of millions of babies, killed so that guys like this can enjoy sex without consequences to themselves.

But as millions of post-abortive women will tell you, the social and family pressures that drive women to abortion are no laughing matter.  They are matters for serious thought by those able to think freely.