‘Gravity’ and the Meaning of Salvation 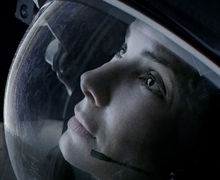 Have you ever thought about how frightening space is? The inky darkness, the cold, the silence and the vacuum. We can only experience it through the glass of a climate-controlled space helmet—it’s too deadly. It lacks essentials such as water, warmth, and air.

But there’s one thing we need just as much—maybe more: community. While we can biologically survive without other people, real life can’t be lived in isolation—even monks who spend much of their time alone and in silence come together to pray and share meals.

This reality came home to me in a profound way when I watched Alfonso Cuarón’s groundbreaking new movie, “Gravity,” starring Sandra Bullock and George Clooney. Much of the buzz has centered on the visuals, but it was the story that I really found moving.

In the film, Bullock’s character—a technician on board the space shuttle Explorer—has to fight for survival after a cascade of satellite debris smashes into the shuttle, killing nearly all of her crew. Tumbling helplessly through space in her space suit, in a communications blackout and her suit’s oxygen reserves running low, Bullock—and audiences—get a taste of what isolation really means. It is terrifying.

The thought of dying alone, spinning away from earth and the human race into the blackness and never being found, plays on some of our deepest fears.

I won’t give away the ending, of course, but Bullock’s character is shortly reunited with a wise-cracking fellow crew member played by George Clooney. And though the two remain in peril for much of the film, we feel palpable relief along with the heroine when her threat of eternal separation abates.

And lest you think I’m stretching the director’s intent, consider that the movie gives Bullock a back story that focuses on self-isolation borne of grief. It’s a renunciation of love and friendship she imposed on herself after a loved one dies, convincing her no guiding Intelligence inhabits the heavens.

It’s only the loss of her crew, which leaves her living out the meaning of irreversible solitude, that causes her to cry out for earth, for love, for God. She even rejoices in the barking of a dog over her radio.

Call me crazy, but it’s hard to imagine a better metaphor for salvation than God’s gravity snatching us from the void of eternal aloneness. I think that’s part of what Jesus was getting at when He likened Heaven to a wedding feast—the ultimate celebration of community and togetherness—and simply called Hell, “the outer darkness.”

C. S. Lewis said something similar in “The Problem of Pain,” when explaining how he thought of damnation:

“In the long run,” he writes, “the answer to all those who object to the doctrine of hell, is itself a question: What are you asking God to do? To wipe out their past sins and, at all costs, to give them a fresh start, smoothing every difficulty and offering every miraculous help? But He has done so, on Calvary. To forgive them? They will not be forgiven. To leave them alone? Alas, I am afraid that is what He does.”

In Christianity, salvation is much more than escaping punishment or attaining bliss. It is the restoration of what it means to be truly human. This restoration is relational: we are brought into right relation with each other, with creation, and most importantly with God. And for the mind trained to think Christianly, films like this one offer a glimpse of that truth as through a glass (or a space helmet), darkly.