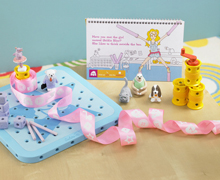 By Emily Jashinsky | The holiday season is characterized largely by routine: gift giving, tree decorating, cookie baking. But over the past few years, a new tradition has arisen from the predictable depths of feminist thought. Each Christmas sees the debate over children’s gendered play preferences rising to the surface of our otherwise pleasant seasonal conversations.

This Christmas the inevitable discussion was sparked over a promotional video for GoldieBlox, a company that creates and sells building games for girls. Unsurprisingly, feminists have greeted the video with unbridled enthusiasm. Slate praised it, in the author’s words, “because it subverts a bunch of dumb gender stereotypes.” Popular feminist blog Jezebel gushed over the video’s message of “empowerment,” praising the little girls for defeating something the site refers to as “princess culture.”

In a world where men largely outnumber women in science, technology, engineering and math…and girls lose interest in these subjects as early as age 8, GoldieBlox is determined to change the equation. Construction toys develop an early interest in these subjects, but for over a hundred years, they’ve been considered “boys’ toys”. By designing a construction toy from the female perspective, we aim to disrupt the pink aisle and inspire the future generation of female engineers.

The question is whether the pink aisle can actually be disrupted — and the bulk of the research says no.

Last year’s discussion on the topic of gendered play preferences focused on a Swedish toy catalogue’s decision to perform a gender swap on its pages– choosing to show little boys playing with dolls and little girls playing with nerf guns (among other things). Resident Scholar Christina Hoff Sommers responded to this statement of gender interchangeability in The Atlantic:

Nothing short of radical and sustained behavior modification could significantly change [children’s] elemental play preferences. Children, with few exceptions, are powerfully drawn to sex-stereotyped play. The female preference for nurturing play and the male propensity for rough-and-tumble hold cross-culturally and even cross-species… Among our close relatives such as vervet and rhesus monkeys, researchers have found that females play with dolls far more than their brothers, who prefer balls and toy cars… Similar results are found in human beings.

Congenital adrenal hyperplasia (CAH) is a genetic condition that results when the female fetus is subjected to unusually large quantities of male hormones—adrenal androgens. Girls with CAH tend to prefer trucks, cars, and construction sets over dolls and play tea sets. As psychologist Doreen Kimura reported in Scientific American, “These findings suggest that these preferences were actually altered in some way by the early hormonal environment.” They also cast doubt on the view that gender-specific play is primarily shaped by socialization.

GoldieBlox has already received mixed reviews from parents. Jamie Smith Davis, a DC mom who aspires to turn her young daughter into an engineer, was exhilarated when she saw the ads and was “certain” her daughter would love the toy. But when she brought GoldieBlox home from the toy store, the results were thoroughly underwhelming. She wrote, “My daughter lost interest in the set entirely after about fifteen minutes, walking off with only the miniature cat.” It’s likely that many young girls will respond to the toy with the same indifference as Davis’ daughter—and that’s perfectly fine.

The efforts of GoldieBlox may truly be empowering to a minority of girls who indeed prefer tinkering to tailoring and building to Barbies. But the message that the company sends in this viral video — intentionally or otherwise– demeans and condescends the “pink aisle” play preferences of most girls. And it seems to be premised on the false (and arguably sexist) conclusion that princess play is less intellectually stimulating than Lego-stacking. What’s most important is that we value equally the play preferences of young girls and boys and respect their choices—whether a little girl enthusiastically nurtures her baby doll or happens to prefer blocks.

If GoldieBlox can successfully inspire more interested girls to pursue STEM careers, I applaud their efforts. Just as long as they don’t mock the average girl’s love for her Barbie in the process. My advice: don’t distress if your daughter would rather play with dolls than building sets– and don’t try to reengineer her play preferences either.

This tired debate is one Christmas tradition we could all live without.