Generation Gap Widening In US 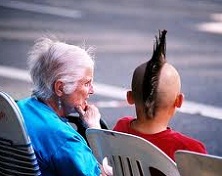 By Hope Yen | From cell phones and texting to religion and manners, younger and older Americans see the world differently, creating the largest generation gap since the tumultuous years of the 1960s and the culture clashes over Vietnam, civil rights and women’s liberation.

A new study released Monday by the Pew Research Center found Americans of different ages increasingly at odds over a range of social and technological issues. It also highlights a widening age divide after last November’s election, when 18- to 29-year-olds voted for Democrat Barack Obama by a 2-to-1 ratio.

Almost eight in 10 people believe there is a major difference in the point of view of younger people and older people today, according to the independent public opinion research group. That is the highest spread since 1969, when about 74 percent reported major differences in an era of generational conflicts over the Vietnam War and civil and women’s rights. In contrast, just 60 percent in 1979 saw a generation gap.

Asked to identify where older and younger people differ most, 47 percent said social values and morality. People age 18 to 29 were more likely to report disagreements over lifestyle, views on family, relationships and dating, while older people cited differences in a sense of entitlement. Those in the middle-age groups also often pointed to a difference in manners.

Religion is a far bigger part of the lives of older adults. About two-thirds of people 65 and older said religion is very important to them, compared with just over half of those 30 to 49 and 44 percent of people 18 to 29.

“Around the notion of morality and work ethic, the differences in point of view are pretty much felt across the board,” said Paul Taylor, director of the Pew Social and Demographic Trends Project. He cited a greater tolerance among younger people on cultural issues such as gay marriage and interracial relationships.

Still, he noted that the generation gap in 2009 seems to be more tepid in nature than it was in the 1960s, when younger people built a defiant counterculture in opposing the Vietnam War and demanding equal rights for women and minorities.

“Today, it’s more of a general outlook, a different point of view, a general set of moral values,” Taylor said.

Among the study’s other findings:

Pew interviewed 2,969 adults by cell phone or landline from Feb. 23 to March 23. The poll has a margin of error of plus or minus 2.6 percentage points. In cases where older persons were too ill or incapacitated, their adult children were interviewed. Pew also used surveys conducted by Gallup, CBS and The New York Times to identify trends since 1969.