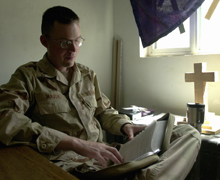 By Michael Cochrane | The Senate passed a defense bill with strong bipartisan support last week that includes important language to strengthen and protect the religious freedom of military members and chaplains.

The 2014 National Defense Authorization Act (NDAA) includes the standard provisions for funding the military as well as amendments that expand the protection of military members’ religious freedoms, including their personal beliefs, actions, and speech. Specific language in the NDAA protects the freedom of military chaplains to “close a prayer outside of a religious service according to the traditions, expressions, and religious exercises of the endorsing faith group.”

“I commend the overwhelming bipartisan support in Congress for protecting the right of service members to freely practice and express their faith,” Family Research Council President Tony Perkins said in a statement. “Congress acted appropriately after investigating numerous incidents involving service members who have had their careers threatened and harassed simply for practicing their faith in a real and tangible way.”

Here are some recent examples of threats to service members’ religious freedom: A superior told an Air Force major to remove from his desk the bible he had kept there for 23 years; an Army master sergeant with 25 years of service faces punishment for serving Chick-fil-A sandwiches at his promotion party; and an Army Reserve training brief on hate groups declared that evangelical Christians and Roman Catholics are extremists as dangerous as al-Qaeda.

Religious liberty advocates have been concerned that unfettered access to the Pentagon’s most senior leadership, including Secretary of Defense Chuck Hagel, by anti-Christian individuals such as Mikey Weinstein, founder and president of the Military Religious Freedom Foundation, unduly influenced military policies and threatened the freedom of religious expression.

To address that concern, the NDAA included a provision requiring the Department of Defense to notify Congress when its employees meet with civilians to change military policy about religious liberty.

The office of Sen. Jim Inhofe, R-Okla., ranking member of the Senate Armed Services Committee, released a statement saying, “Sen. Inhofe supported the inclusion of language in this year’s NDAA which would enhance the protection of rights of conscience of the members of the armed forces and chaplains by making it explicit in law that not only beliefs must be protected but expressions of beliefs as well.”