Colleges Worry Their Big Bills Will Keep Students Away 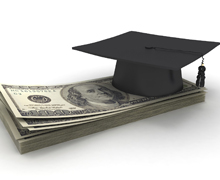 Maintaining strong enrollment is becoming a bigger worry for college administrators as cash-strapped families begin to balk at rising tuition bills, according to a survey by audit, tax and advisory firm KPMG LLP.

The annual survey found that 37% of 103 higher-education leaders said they are “very concerned” about their ability to maintain current enrollment levels, up from 23% last year. The survey included 62 top administrators from private institutions and 41 from public ones.

The economic crisis hurt many families’ credit scores, and at the same time, the underwriting standards for loans have gotten tighter, said Milford McGuirt, KPMG’s national audit sector leader for higher education and non-for-profits. “Families have to make tough decisions on the amount of investment and the return on investment from going to college,” he said.

The survey said many schools are trying to lower costs without hurting quality, with 59% of respondents looking to online education and other innovative strategies, compared with 41% last year.

The school leaders said families’ finances were a growing challenge in maintaining enrollment, with 58% calling it the top factor, compared with 49% last year.

Average tuition and fees for full-time, first-year undergraduates at four-year state schools were $7,526 for the academic year that ended this past spring, a rise of 6.7% from a year earlier, according to data from the U.S. Department of Education. In addition, many states have cut funding to higher education in recent years.

“In 20 years, the shift from tuition being 23% of operating revenue at public universities to now it’s right at 50% is a trajectory that’s not positive and probably not sustainable,” said Michael Reilly, executive director of the American Association of Collegiate Registrars and Admissions Officers. Parents and students are responding in a number of ways, including shifting to two-year rather than four-year schools and staying closer to home.

On Tuesday, the U.S. Census Bureau highlighted the problem in a report showing that enrollment in colleges and graduate schools had fallen in 2012 for the first time since 2006. Overall undergraduate- and graduate-school enrollment fell by about a half million to 19.9 million in 2012, according to the Census Bureau’s annual school-enrollment report.