Cohabiting: A Poor Substitute for Marriage 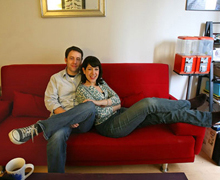 By Eric Metaxas | The Downside of Cohabiting

Twelve years ago, half of the twenty-somethings surveyed by the National Marriage Project agreed with the statement “You would only marry someone if he or she agreed to live together with you first, so that you could find out whether you really get along.”

Their reasoning was simple: “Moving in together before marriage was a good way to avoid divorce.”

Since then, the percentage agreeing with the statement has probably increased. But what has not increased is the correctness of that justification for cohabitation. Because it was wrong then, and it is just as wrong now, as a New York Times opinion piece points out.

You heard me correctly: the New York Times.

In a piece entitled “The Downside of Cohabitating Before Marriage,” psychologist Meg Jay of the University of Virginia describes what is known as the “cohabitation effect”: “Couples who cohabit before marriage . . . tend to be less satisfied with their marriages—and more likely to divorce—than couples who do not.”

There are many possible explanations for the cohabitation effect. For instance, “cohabiters [are] less conventional about marriage and thus more open to divorce.” Or it may be related to religious factors.

But as Jay tells us, “at least some of the risks may lie in cohabitation itself.”

The reason why this is the case comes down to one word: commitment. Most cohabiting couples, when asked why they moved in together, reply “it just happened.” According to Jay, “Moving from dating to sleeping over to sleeping over a lot to cohabitation can be a gradual slope, one not marked by rings or ceremonies or sometimes even a conversation. Couples bypass talking about why they want to live together and what it will mean.”

Even setting aside questions about the morality of cohabitation, the differences between this “process” and the decision to get married are obvious—so obvious that it’s hard to see how cohabitation can prepare anyone for marriage.

And that’s before you take into account the “different, unspoken—even unconscious—agendas” of the cohabiting partners. While “women are more likely to view cohabitation as a step toward marriage . . . men are more likely to see it as a way to test a relationship or to postpone commitment.”

One of Jay’s clients told her that she “felt like [she] was on this multiyear, never-ending audition to be his wife.” They got married once they hit their thirties, not because of a newfound commitment on his part but because at that point “We had all this furniture. We had our dogs and all the same friends.” Breaking up seemed more difficult than getting married.

But a year later, the same client was looking for a divorce lawyer.

Nonetheless, most Americans see cohabitation as a “step towards marriage,” despite ample evidence that cohabitation is a poor substitute, and even worse preparation, for marriage.

If there’s a young person in your life considering cohabitation, point him or her to Jay’s article. As Jay writes, she’s all “for young adults knowing that . . . moving in with someone can increase your chances of making a mistake.”