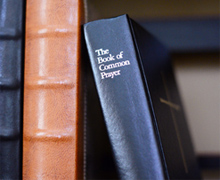 When I came back to church after a faith crisis in my early 20s, the first one I attended regularly was a place called Praxis. It was the kind of church where the young, hip pastor hoisted an infant into his arms and said with sincerity, “Dude, I baptize you in the name of the Father, Son and Holy Spirit.”

The entire service had an air of informality. We sat in folding chairs, sang rock-anthem praise and took clergy-free, buffet-style communion. Once a month, the pastor would point to a table at the back of the open-rafter sanctuary and invite us to “serve ourselves” if we felt so compelled.

For two years, my husband and I attended Praxis while he did graduate work at Arizona State University and I worked as a documentary producer. As someone who had defected from the church at age 23, I thought it was the perfect place for me: a young, urban church located four blocks from Casey Moore’s Irish Pub, an unchurchy church with a mix of sacred tradition and secular trend.

I’m not the first person ever to go low-church, and Praxis isn’t the first institution to pursue that hard-to-get demographic: young people. Across America today, thousands of clergy and congregations — even entire denominations — are running scared, desperately trying to convince their youth that faith and church are culturally relevant, forward-looking and alive.

For some, the instinct is to radically alter the old model: out with the organ, in with the Fender. But as someone who left the mainstream church and eventually returned, I’d like to offer a word of advice to those who are so inclined: Don’t. Or at least proceed with caution. Change carefully; change wisely, with thoughtfulness and deliberation. What young people say we want in our 20s is not necessarily what we want 10 years later.

Churches, of course, are right to worry. They’ve been losing young people like me for years. A study released last fall by the Pew Forum on Religion & Public Life found that not just liberal mainline Protestants but also more conservative evangelical and “born-again” Protestants are abandoning their religious attachments. Our complaints against the church know no bounds: We don’t like the politics. We want authenticity and openness. We demand a particular worship aesthetic.

Churches often leap to meet these demands, and yet the arc of my own story suggests that chasing after the most recent trend may not be the answer.  I was raised in a small Presbyterian congregation but left and later returned to the church for reasons too complex to summarize here.

When I slipped back in, I wanted what my own parents had wanted in their hippie youth back in the 1970s: an anti-institutional church that looked less like a church and more like a coffee house. But after two years at Praxis, the coffee tasted thin.

I felt homeless in heart. I missed intergenerational community. I missed hymns and historicity, sacraments and old aesthetics. I missed the rich polity — even the irritation — of Presbytery.

In 2007, when my husband and I moved from Arizona to Austin, Texas, and went in search of a church, we skipped the nondenominationals and went straight to the traditionals. We found an Anglican church where every Sunday morning we now watch clergy process up the aisle wearing white vestments and carrying a 6-foot cross.

We take communion from an ordained priest who holds a chalice of blood-red wine and lays a hand of blessing on our children. We sing the Lord’s Prayer and recite from the Book of Common Prayer — in which not once in 1,001 pages does the word “dude” ever appear.

In my 20s, liturgy seemed rote, but now in my 30s, it reminds me that I’m part of an institution much larger and older than myself. As the poet Czeslaw Milosz said, “The sacred exists and is stronger than all our rebellions.”

Both my doubt and my faith, and even my ongoing frustrations with the church itself, are part of a tradition that started before I was born and will continue after I die. I rest in the assurance that I have something to lean against, something to resist and, more importantly, something that resists me.

Critics might say I’m an anomaly. My story, they would say, isn’t typical of most young people.

But that’s not the point. I can’t alter statistics or trends. I can’t tell congregations or their pastors what they need to change, if anything. I can’t speak to church marketing or survival strategy, nor can I enter the fraught (and important) theological debate between liberalism and conservatism, which drives some of the attrition of young people.

What I offer instead is a word of encouragement that reminds the church to take the long view.

For more traditional congregations that struggle to keep youth in the pews, take heart. The old model isn’t necessarily lost. Praxis and churches like it have a place — they draw people who would otherwise never set foot in church, people who have a legitimate contemporary aesthetic that appreciates informality and mainstream music. But your church has a place, too.

Consider the changes that people go through between age 22 and 32. Consider that some of us in time renew our appreciation for the strengths of a traditional church: historically informed hierarchy that claims accountability at multiple levels, historically informed teaching that leans on theological complexity, and liturgically informed worship that takes a high view of the sacraments and draws on hymns from centuries past.

Some of us want to walk into a cathedral space that reminds us of the small place we inhabit in the great arc of salvation history. We want to meet the Unmoved Mover in an unmoved sanctuary.

So as you change — or as change is imposed upon you — keep your historic identity and your ecclesial soul. Fight the urge for perpetual reinvention, and don’t watch the roll book for young adults.

We’re sometimes fickle. When we come, if we come, meet us where we are. Be present to our doubts and fears and frustrations. Walk with us in the perplexing challenge of postmodern faith.

Even so, your church (and your denomination) might die. My generation and those following might take it apart, brick by brick, absence by absence.

But the next generation might rebuild it. They might unearth the altar, the chalice and the vestments and find them not medieval but enduring. They might uncover the Book of Common Prayer and find it anything but common.