Can Marriage Bring a Cure to Poverty? 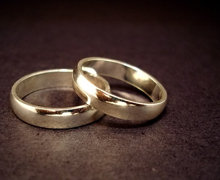 By Annie Lowrey | Imagine a late-night television commercial aimed at Washington’s wonks: Tired of your same old tax credits and grant proposals? Ever dreamed of a policy tool that improved children’s health, bolstered income and eradicated poverty — all without costing the government a penny? Then, a smash cut to a wedding scene.

With Democrats and Republicans pitted against one another in a vicious election-year battle over how to alleviate poverty, marriage is the policy solution du jour. Take a speech given by Senator Marco Rubio last month on the 50th anniversary of the War on Poverty, Lyndon B. Johnson’s governmental campaign to boost the opportunity and incomes of the poor. When it started, “93 percent of children born in the United States were born to married parents. By 2010 that number had plummeted to 60 percent,” Rubio said, calling marriage “the greatest tool to lift children and families from poverty.”

Rubio did not just pull the notion out of thin air — or, for that matter, Corinthians. Economists have done studies showing that if you snapped your fingers and suddenly all the country’s poor, unmarried partners were hitched — including gay and lesbian couples legally precluded from marrying in most states — the poverty rate would drop. With social trends pushing partners apart, why shouldn’t the government push them together — and help end poverty and improve the lot of children while we’re at it? It’s a rare policy solution that data-crunching geeks and Bible-thumping crusaders can agree on — albeit for very different reasons. Unfortunately, there might not be much that Washington can actually do about it.

Nobody doubts that where marriage is, poverty tends not to be; the statistics are stark. Almost no marriages in which both partners work full time fall below the poverty line; about one-third of households headed by a single mother are poor. One in eight children with two married parents lives below the poverty line; five in 10 living with a single mother do. And income aside, children raised by two parents are less likely to have behavioral problems, be asthmatic or hungry; they are more likely to achieve at school and so on. The effects are perhaps even larger than researchers had previously grasped. In a new study, the economist Raj Chetty and his co-authors found that, in terms of income mobility, nothing matters more for a low-income child than the family structures she sees in her community — not neighborhood segregation, school quality or a host of other factors.

Giving all this evidence some urgency is the fact that so many children are born out of wedlock today, and so many couples decide to divorce or not to marry at all. As Rubio pointed out, by now, about four in 10 children are born to an unmarried mother. For poor children, that proportion is higher.

It’s not as if Washington just became aware of this correlation either. Back in the ’90s, Bill Clinton’s welfare overhaul allowed states to spend federal funds on marriage promotion. The George W. Bush administration continued this strategy, seeding state-level programs that persuaded couples to marry or helped them stay married. Some of the government’s programs seem to have had an effect on the low-income folks they targeted: Couples who participated in an Oklahoma initiative called Family Expectations were about 20 percent more likely to stay together for three years than couples in a control group, for instance. But over all, Uncle Sam tends to make a poor Cupid. The preponderance of evidence is that Washington instead has, over the years, wasted hundreds of millions of dollars on relationship counseling — laugh with your partner! Talk it out! — to no real effect on marriage rates or child poverty or anything else.

While culture warriors might focus too naïvely on matters of the heart, wonks have their own strategies for promoting marriage, and they’re all left-brain. For example, some low-income married women who go back to work after having children face steep, steep tax rates. Imagine a working husband making $25,000 a year whose wife decides to take a job for $25,000 a year. Melissa S. Kearney, the director of the Hamilton Project at the Brookings Institution, and a co-author have estimated that the couple would keep only about 30 percent of the wife’s earnings, after you factor in the loss of breaks like the earned-income tax credit. Statistics like that, along with the sky-high cost of child care, help explain why so many women choose not to work — or not to marry. By removing these disincentives, the rather dispassionate logic goes, more Americans would take the plunge.

But even if Washington got rid of all its dumb and ineffective policies to promote marriage and implemented a number of smart ones to do so, it might all be for naught. Some researchers think that marriage — or a lack thereof — is not the real problem facing poor parents; being poor is. “It isn’t that having a lasting and successful marriage is a cure for living in poverty,” says Kristi Williams of Ohio State University. “Living in poverty is a barrier to having a lasting and successful marriage.”

To understand why, it is worth looking at the economic fortunes of the poor in isolation — marriage rates and childbearing out of wedlock aside. Globalization, the decline of labor unions, technological change and other tidal economic forces have battered the poor, with years of economic growth failing to lift their prospects. These forces have inevitably affected young people’s choices, researchers think.

In an economy that offers so little promise to those at the bottom, family planning in the name of upward mobility doesn’t make much sense. “Engaging in family formation by accident rather than by design, you get a story of low-opportunity costs,” says Kathryn Edin, the poverty researcher at Johns Hopkins. “We’ve created the situation where pregnancy is not the worst thing that can happen to you. It can be seen as a path to redemption in an otherwise violent, unpredictable, hopeless world.”

Similar forces might also spur some young couples not to get married, even if they want to. Many poor women opt not to marry the poor men in their lives, for instance, to avoid bringing more economic chaos into their homes. And the poor women who do marry tend to have unstable marriages — often to ill effect. One study, for instance, found that single mothers who married and later divorced were worse off economically than those who did not marry at all. “These women revere marriage, they want to get married,” Williams says. “They aren’t making an irrational choice not to marry.”

The success or failure of any given marriage depends on so many minute, hardly tangible factors. But from an economist’s perspective, our collective allergy to matrimony might be a macroeconomic issue: In order to save marriage, we’d have to end poverty. Creating good jobs with growing wages at the bottom of the income scale might be the best, if hardest, way to encourage young couples to wed. “Marriage is an emotional institution, a child-rearing institution and an economic institution,” says W. Bradford Wilcox, the director of the National Marriage Project. “Unless we improve the fortunes of poor working people, particularly poor working men, we aren’t going to see marriage coming back.” And then we wouldn’t need policy wonks and politicians peddling marriage as a salve for poverty. How romantic!