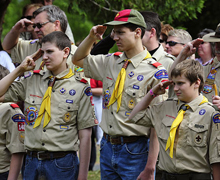 By Thomas Messner | Legislation “cruising” through the California legislature would strip certain state-level tax exemptions from nonprofit youth groups that differentiate on “gender identity,” “sexual orientation,” and other bases.

The bill names familiar youth organizations such as the Girl Scouts, Boy Scouts, and Little League. However, as one report observes, the bill “appears to be aimed more at the Boy Scouts,” who have drawn heat for their morally based membership standards.

Using tax policy to coerce ideology is a bad idea. Even the liberal Los Angeles Times has editorialized against the proposal, explaining, “Tax-exempt status is not conferred on groups for having policies beloved by lawmakers or even a majority of a state’s residents. It is designed for nonprofits that provide a public benefit and that meet the requirements of reinvesting income into their programs rather than taking profits.”

As the editorial further observes, if lawmakers can “go after” the Scouts for their membership standards, “what group will they go after next?”

One group that lawmakers could go after next includes religious organizations that believe that marriage is a union of one man and one woman. For years analysts have warned that tax policy could be used to coerce organizations that do not recognize same-sex marriage.

But coercion through tax policy is just one kind of threat to religious freedom of people and groups that adhere to traditional moral understandings on issues such as sex and marriage.

In August, for example, the New Mexico high court ruled that a Christian photographer violated nondiscrimination standards by refusing to photograph a same-sex commitment ceremony even though doing so would have violated the photographer’s deeply held religious beliefs.

Other cases involve Christian adoption and foster care agencies that have been forced to stop providing those services because they object to placing children in same-sex households. No matter that other agencies were willing to facilitate placements with same-sex couples.

Increasingly, people and groups are being forced to choose between abandoning traditional moral beliefs about sex and marriage and paying a price for standing strong. Yet other cases include a baker, a florist, a bed-and-breakfast, a t-shirt company, a student counselor, theSalvation Army, and more.

Protecting the free exercise of religious and moral conscience is one of the most effective and principled ways to promote social peace and civic fraternity, especially in pluralistic societies (such as ours) on an issue where consensus is currently elusive.

Federal, state, and local policy should do more to protect the religious freedom and right of conscience of people and groups that support traditional understandings such as marriage as one man and one woman.