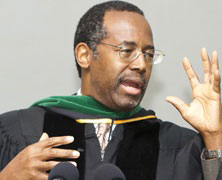 No, not that Commencement speaker controversy. That Commencement speaker controversy I understand. It’s relatively simple: The left-liberals who run the show at Georgetown have found a way to signal to the world that the nation’s oldest Catholic, and most famous Jesuit, university stands with the Obama administration in its war (to use, if I recall correctly, Kathleen Sebelius’s own word) against the Catholic bishops and others who oppose the HHS mandate as a violation of religious freedom and the rights of conscience (you know, the enemies of women’s “reproductive health”). By honoring Secretary Sebelius, they can help to undermine the bishops’ credibility and blunt the force of their witness as leaders of the Catholic church. I get it. It’s a bold and clever move. Although I find its substance appalling, I can’t help but admire its shrewdness.

But, no, I mean a different Commencement speaker controversy.

My friend and former colleague on the President’s Council on Bioethics, Dr. Benjamin Carson of Johns Hopkins University School of Medicine, is, to put it simply, one of the most distinguished people in the world. His feats in the field of neurosurgery are literally the stuff of legend. His life story is nothing short of inspiring. See here. His works of philanthropy are remarkable in both their generosity and their impact on the lives of people in need. See, for example, here. If there were a Nobel Prize in Human Excellence, Ben (who already has the Presidential Medal of Freedom among countless other honors) would be among the first laureates.

But a controversy has broken out at Emory University, where Ben is scheduled to give the Commencement Address and recieve an honorary degree. What is it about Ben Carson that would cause five hundred people–faculty members, students, alumni–to sign a letter of “concern” about him as the Commencement speaker? Well, it turns out that he is an academic heretic. He doesn’t believe in the Darwinian theory of evolution. Perhaps he doesn’t believe in evolution at all. And he argues that belief in Darwinian evolution, or any form of pure materialism, undermines the basis of ethics.
In their letter of “concern,” warning unwary people about the heretical Commencement speaker, Dr. Carson’s critics place particular emphasis on this last point. They are upset that he must consider people who believe in Darwinism to be unethical. That’s insulting. That’s exclusionary. Etc., etc.

But of course Gentle Ben (and he is indeed one of the gentlest, kindest people one could ever meet) doesn’t believe that his Darwinist friends and colleagues are necessarily unethical. What he believes is that Darwinism is necessarily materialistic. (This is a view about Darwinism that he shares with some devout Darwinists themselves.) And he believes that materialism, if true, is incompatible with free will and with ethical norms (which must be, after all, norms for the guidance of free choices, if they are to have any standing, force, and validity at all). Now, he knows perfectly well that people who believe in materialism are in many cases decent, honorable, ethical people. But he thinks that they lead lives that are much better than their formal philosophical beliefs would require them to lead. He believes that their commitment to materialism makes it impossible for them to give a sound account of the ethical norms which they themselves, to their credit, live by. Of course, he might be wrong about that (though I don’t think he is), just as he might be wrong about the validity of Darwinism as a scientific theory, or the compatibility of Darwinism with the rejection of materialism. But it’s certainly not a mean or crazy thing to believe or say. It’s scarcely a cause for “concern” about having him as a Commencement speaker.

I do wish that more contemporary liberals would be a bit more, well, liberal when it comes to tolerating dissent from the orthodoxies of their faith. Or else I wish they would abandon the pretence of being liberals in the old-fashioned sense and declare their faith to be the equivalent of a religion from which various forms of dissent are simply not to be tolerated. Although I would prefer the former course of action, either course would have the virtue of bringing liberal practice and liberal theory better into line with each other.