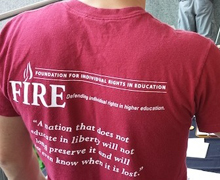 By Nico Perrino | As college students head back to campus this fall, they face a multitude of threats to their fundamental freedoms. Unconstitutional “free speech zones” and demonstration policies restrict when and where students can speak. New federal rules compromise due process and free speech rights. Freedom of association continues to suffer as administrators and student governments hamstring student groups they dislike. Student journalists covering such abuses continue to face obstacles….

“As college students settle into their fall semesters on campuses across the country, it is important that they—as well as their parents, grandparents, friends, and family—learn about common threats to basic rights in higher education,” Foundation for Individual Rights in Education (FIRE) President Greg Lukianoff said. “FIRE is proud to offer a wealth of resources explaining to students what rights they have and why those rights matter. And, as always, FIRE is here to help when students run afoul of campus censors.”

Students who wish to speak freely on campus could be found in violation of their school’s demonstration policies if, for example, they do not obtain official permission for their expressive activity days or even weeks in advance. In addition to requiring expression to be pre-registered, many schools also regulate where students can speak, despite the fact that yet another so-called “free speech zone” was defeated in federal court last year.

For students accused of some campus offenses, schools continue to limit due process protections in response to federal guidance that requires they use the low “preponderance of the evidence” (50.01% likelihood) standard when adjudicating cases of sexual harassment or sexual misconduct on campus. The Departments of Justice and Education further muddied the waters this past May when they endorsed an expanded definition of sexual harassment that restricts protected speech.

Participation in student groups is one of the hallmarks of the college experience for many students, yet these groups are increasingly under attack from administrators and student governments that disagree with their missions or beliefs. At Trinity College, a new social code imposes crippling new regulations on fraternities and sororities that contradict the school’s promises of freedom of association and threaten to put an end to the groups’ existence. And at Johns Hopkins University, a pro-life group’s application for recognition was denied because the student government thought the group might make people feel “uncomfortable.”

What about student journalists reporting on rights violations that occur on their campuses? Their ability to do so may be restricted as well. In the past year, a University of Memphis student newspaper had its budget cut explicitly because of its content and a SUNY-Oswego journalism student was suspended simply for interviewing a source….

It is not all bad news for students returning to campus this year. Fewer unconstitutional and illiberal speech codes are maintained now than at any time in the last seven years, according to FIRE’s Spotlight on Speech Codes 2013 report. In addition, over the summer, students at North Carolina’s public colleges and universities became the first in the country to receive the legal right to an attorney (or, if they choose, a non-attorney advocate) in most non-academic disciplinary proceedings.

“Students need to prepare themselves to defend their rights on campus,” said FIRE Senior Vice President Robert Shibley. “In the current academic climate, our colleges and universities can’t be trusted to automatically respect those rights. But with the help of concerned students, faculty, and alumni, FIRE can create a culture of freedom on campus.”

FIRE is a nonprofit educational foundation that unites civil rights and civil liberties leaders, scholars, journalists, and public intellectuals from across the political and ideological spectrum on behalf of individual rights, freedom of expression, academic freedom, due process, and rights of conscience at our nation’s colleges and universities. FIRE’s efforts to preserve liberty on campuses across America can be viewed at thefire.org.