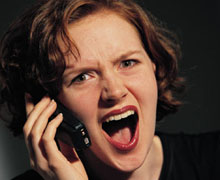 By Eric Metaxas | America is facing a potentially deadly epidemic. And I’m not talking about Bird Flu….

As Christmas Day approaches, it appears that many of us are acting more like Ebenezer Scrooge than Tiny Tim.

According to a new USA Today study, the share of Americans who report feeling angry or irritable has surged from 50 percent just two years ago to 60 percent today. A Harvard Medical School study from 2012 found that nearly two-thirds of American teens admit to having anger attacks involving the destruction of property, threats of violence, or engaging in violence.

“Some are describing this as ‘America’s anger epidemic,’ ” says one New York news website. It cites unemployment, the economy, and for those who have work, overworking, as contributing factors.

The signs of our nation’s irritability are all around us. Think of the political rancor, the everyday nastiness of the online world, the mall and workplace shooters, and even the so-called “knockout game,” where youths prey on unsuspecting pedestrians in urban areas, trying to knock them Daily_Commentary_12_10_13down with a single punch.

“For four decades,” reports the Associated Press, “a gut-level ingredient of democracy—trust in the other fellow—has been quietly draining away. These days, only one-third of Americans say most people can be trusted. Half felt that way in 1972.”

The AP concludes, “Forty years later, a record high of nearly two-thirds say ‘you can’t be too careful’ in dealing with people.”

This worrisome trend calls to mind Francis Fukuyama’s thought-provoking book, “Trust: The Social Virtues and the Creation of Prosperity.” Fukuyama pointed out that only those nations with high levels of social trust can thrive economically in today’s globalized world. It stands to reason, then, that increasing anger and decreasing trust do not bode well for the country’s future.

And of course that’s just on the economic side of the ledger. What about the moral side? How are we to regain earlier levels of civility, peace, and other forms of social capital?

It might go without saying that Christians should be salt and light in an age of anger and distrust. But I’ll say it anyway! At a minimum this means that, though we must stand up unapologetically for the truth—on vital issues such as religious liberty, marriage, and the sanctity of human life—we do so, in the words of Abraham Lincoln, “with malice toward none, with charity for all.”

As Pope Francis said recently, we need a “revolution of tenderness.”

While Christians have not always reflected our Savior as clearly as we should in these areas, when we have, we truly have been “the light of the world”….“The Christian church,” [Chuck Colson] said, “makes a Great Proposal, inviting everyone to the table, regardless of color, ethnic origin, background, or economic status. We’re inviting people to consider a worldview that works . . . through which people can discover shalom and human flourishing….”

Our angry and distrustful neighbors don’t need to be yelled at. They need to be won over, not defeated. They need to be invited to the feast. Let’s remember this truth as we prepare our own Christmas feasting. Then perhaps we may even be privileged one day to hear some of them say, “God bless us, every one.”