An Alternative Perspective on The Iron Lady (For Your Consideration) 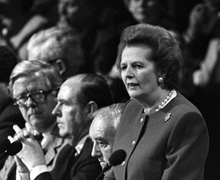 By Steve Tobak | America’s current political and economic climate is not unlike conditions when Margaret Thatcher became British Prime Minister in 1979. It’s all there: high unemployment, sluggish growth, big government, and increasing regulation, especially in banking and healthcare.

And yet, besides helping to put an end to the cold war and bring down the Soviet Union, Thatcher somehow managed to execute a remarkable economic turnaround of the UK’s economy and standing as a world power.

Watching the news of her death, I was struck by the sharp contrast between Britain’s Iron Lady and President Obama. If it was her passion and her politics that brought the UK out of recession, then it’s no wonder why the policies of this administration are so ineffectual, to say the least.

Ideology aside, the personalities and leadership styles of Margaret Thatcher and Barack Obama couldn’t be more different. I think it would serve America’s aspiring leaders well to note some of the more impressive lessons from Thatcher, one of the most consequential political leaders of the twentieth century:

Sometimes you’ve got to take a stand. The Falkland Islands incident may seem inconsequential on the surface, but Thatcher had good reason to be unwilling to give up an inch of what remained of the British Empire. She knew that, if Britain failed to take a stand, it could lead to continued erosion of its power and influence. It was a watershed moment in her political career.

The contrast with America’s current foreign policy of apologetic appeasement and inaction couldn’t be more stark.

It pays to be a perceptive people person. Who would have thought that a British Prime Minister would be a key player in a bizarre leadership triangle that ultimately united Germany and freed millions by dissolving the Soviet Union.

Besides her unique relationship with President Reagan, Thatcher instantly liked Soviet Prime Minister Gorbachev and perceptively knew that he was someone she could  “do business with.” As she once said, “It pays to know the enemy … you may have the opportunity to turn him into a friend.”

That insightfulness that only comes from a genuine people person and willingness to reach across political and national boundaries to make important things happen contrasts sharply with Barack Obama’s personality and leadership style.

Indeed, Bob Woodward, author of ‘The Price of Politics,’ once said that Obama is less successful at getting things done than Reagan and Clinton because, “He’s cut off. He has not got the sort of phone call relationship, personal relationship where he can call somebody up and say, look, let’s do this … in the larger interest of the whole country.”

Leadership isn’t a popularity contest. On average, Thatcher had a lower approval rating than any contemporary British Prime Minister. That didn’t concern her in the least. She once said, “If you set out to be liked, you would be prepared to compromise on anything at any time, and you would achieve nothing.”

Indeed, when it came to her staunch belief that freedom and free enterprise inevitably leads to prosperity, that lower taxes, less government, deregulation, and freedom for business and consumers was the key to a reversal of Britain’s fortunes, she stood her ground no matter how vicious her critics became.

While it’s immensely challenging for leaders to know the difference between sticking to their guns on critical issues while remaining open to the possibilities of detente with a political enemy, Thatcher, like Ronald Reagan, seemed to walk that fine line effortlessly.

Perhaps the key to that dichotomy lies in the genuine nature of people. In contrast to her Iron Lady public personae, friends and associates knew Thatcher to be a genuinely warm and caring human being.

What a simple revelation with such far-reaching implications. Clearly, the most polarizing issue of our time is the battle between our growing entitlement culture and what made America great: individual responsibility and personal freedom.

Frankly, I don’t see the dilemma. Like Thatcher, I believe that government as a solution to “society’s” problems only serves to make people dependent on government. It shackles them by removing all motivation to take responsibility for their own situation.

It’s common sense that the result would be a never-ending spiral of increasing dependency, entitlements, and government growth. And that ever-increasing expense burden will only continue to drain the economy and increase debt. It’s clearly an unsustainable downward spiral.

People are always asking me for a fix, a silver bullet, a miracle cure. There is none. We don’t live in Utopia. We live in the real world. The only answer is personal responsibility: take responsibility for yourself and your family and vote for like-minded leaders. If you do that, you’re part of the solution. If not, you’re part of the problem. Not as elegant as something Thatcher would have said, but then, I’m no lady.