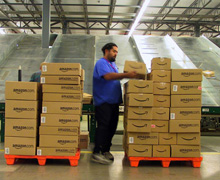 By Rich Tucker | People line up to go to the Apple store, but can’t stand waiting in line at the DMV. That’s because consumers love good products and good service. Businesses tend to provide reasons for lining up, while governments simply force us to.

So for years now, conservatives have rejoiced in the power of the Internet. Web-based businesses increase competition, squeezing down costs and forcing their stodgy competitors to improve or collapse. But the Internet has come of age, and these days it’s just as subject to the temptation of cronyism as any brick-and-mortar store.

Amazon.com serves as an ideal example.

The difference now is that Amazon is large enough that collecting sales tax is not a burden. Plus it can afford all the lawyers it will need to deal with rules written by thousands of tax jurisdictions nationwide. Small retailers can’t afford that hassle, so Amazon is using the government’s power to tax as a way to reduce competition. That won’t be good for consumers in the long run.

Craigslist is another profitable website that destroyed its newspaper competition in a fair fight and now wants to protect its turf. “Craigslist has sued or issued cease-and-desist letters to dozens of startups in recent years,” reports Gordon Crovitz in The Wall Street Journal. “Litigation is a common tactic to suppress competition, especially when overly broad statutes are available as cudgels.”

Craigslist is currently using a law written in 1984—in the Dark Ages before Web commerce—to try to block competitors.

Cronyism comes in many forms, but it depends on companies using the power of the government to help them make money by blocking out competition. There are two business models on display: Young start-ups usually try to find ways to produce newer or better products at lower prices. But as companies get older and larger, they too often turn to using the power of government to rig the game, finding ways to use regulation to limit their competition.

It’s a collusion that limits competition and hurts consumers.