The Crux of Religious Liberty: Do We Practice What We Preach? 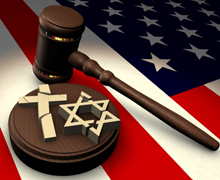 By John Stonestreet  | In the midst of all of our talk about religious liberty, we face a tough question: Will we practice what we preach?

In 2009, Chuck Colson and Drs. Timothy and Robert George launched the Manhattan Declaration, calling Christians of all traditions to defend marriage, the sanctity of life, and religious freedom.

Many people found it odd that religious freedom made the list. After all, the Constitution’s guarantee of free exercise has made America one of the safest places in the world for religious minorities.

But the Manhattan Declaration turned out to be almost prophetic. Just five years after its signing, many Christians in this country are being forced to choose between their livelihoods and their religious convictions. And that may just be the beginning, especially if developments in Europe foreshadow the future here, as they often do.

Take Reverend Alan Clifford, Pastor of Norwich Reformed Church in the U.K. Earlier this year, the Norfolk police informed Rev. Clifford that he’d been reported for spreading “homophobic hate.” What was his crime? Distributing gospel tracts about how Christ offers forgiveness and healing for all sinners—including homosexuals.

Reverend Clifford could pay a £90 fine or face prosecution. Never mind that he explained how his evangelism was about love, not hate, and quoted the European Court of Human Rights, which has ruled that freedom of expression includes speech that might cause offense.

All to no avail. Rev. Clifford’s could soon face a judge for his alleged homophobic hate.

Such a thing would have been impossible to imagine even a decade ago. Listen to what Lord Justice Sedley famously argued in a ruling on a case before the British High Court in 2000:

“Free speech,” he wrote, “includes not only the inoffensive, but the irritating, the contentious, the eccentric, the heretical, the unwelcome and provocative provided that it does not tend to violence. Freedom only to speak inoffensively is not worth having.”

On this side of the pond, another well-known political figure said much the same thing. Thomas Jefferson spent much of his life advancing the cause of religious freedom. As he wrote when a member of the Virginia legislature, “No man…[should] be enforced, restrained, molested, or burdened on account of his religious opinions or belief…all men shall be free to profess, and by argument to maintain, their opinions in matters of religion…”

That means we have a right to speak and live our convictions—regardless of whom they offend.

Now it’s easy enough to give a hearty “hear, hear!” to Sedley and Jefferson when it comes to our rights. But as Timothy George and Eric Teetsel both articulated at our recent briefing on religious liberty, religious liberty is for everyone, Muslims, Jews, and—gulp—wiccans, not just Christians, or else it is for no one.

Os Guinness agrees. In his new book “The Global Public Square,” he outlines eight steps necessary to protect religious liberty. The very first is recognizing that religious liberty is for everyone. We have this important book at the BreakPoint online bookstore.

As Chuck wrote in one of his last columns on the subject, “Christianity stands apart as the only major faith that believes that because every individual human being is created in the image of God, freedom of religion is every human’s right.”

This doesn’t mean we have to agree with or like other people’s beliefs. Nor does it mean that we believe that the state must give free reign to every religious practice. For example, religious expression that would restrict historically recognized, inherent rights must be limited (which clarifies the difference between an Islamic community building a mosque and implementing radical Sharia law).

But it does mean we need to practice what we preach.

Editor’s Note:  Learn more about how the First Amendment affects religious expression at our FTU Course: Should This Book Be Banned?