It’s Harmless, Right? This Is Your Brain on Drugs 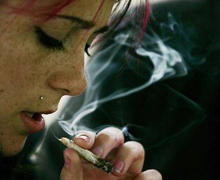 By Abigail Sullivan Mooreoct | The gray matter of the nucleus accumbens, the walnut-shaped pleasure center of the brain, was glowing like a flame, showing a notable increase in density. “It could mean that there’s some sort of drug learning taking place,” speculated Jodi Gilman, at her computer screen at the Massachusetts General Hospital-Harvard Center for Addiction Medicine. Was the brain adapting to marijuana exposure, rewiring the reward system to demand the drug?

Dr. Gilman was reviewing a composite scan of the brains of 20 pot smokers, ages 18 to 25. What she and fellow researchers at Harvard and Northwestern University found within those scans surprised them. Even in the seven participants who smoked only once or twice a week, there was evidence of structural differences in two significant regions of the brain. The more the subjects smoked, the greater the differences.

Moderate marijuana use by healthy adults seems to pose little risk, and there are potential medical benefits, including easing nausea and pain. But it has long been known that, with the brain developing into the mid-20s, young people who smoke early and often are more likely to have learning and mental health problems. Now researchers suggest existing studies are no longer sufficient. Much of what’s known is based on studies conducted years ago with much less powerful pot. 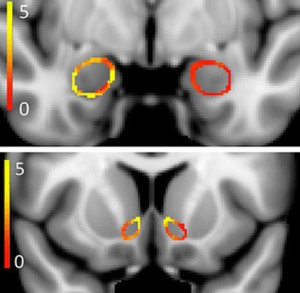 A Harvard-Northwestern study has found differences between the brains of young adult marijuana smokers and those of nonsmokers. In these composite scans, colors represent the differences — in the shape of the amygdala, top, and nucleus accumbens. Yellow indicates areas that are most different, red the least. Credit: The Journal of Neuroscience

Marijuana samples seized by the federal Drug Enforcement Agency show the concentration of THC, the drug’s psychoactive compound, rising from a mean of 3.75 percent in 1995 to 13 percent in 2013. Potency seesaws depending on the strain and form. Fresh Baked, which sells recreational marijuana in Boulder, Colo., offers “Green Crack,” with a THC content of about 21 percent, and “Phnom Penh,” with about 8 percent. The level in a concentrate called “Bubble Hash” is about 70 percent; cartridges for vaporizers, much like e-cigarettes, range from 15 to 30 percent THC.

High-THC marijuana is associated with paranoia and psychosis, according to a June article in The New England Journal of Medicine. “We have seen very, very significant increases in emergency room admissions associated with marijuana use that can’t be accounted for solely on basis of changes in prevalence rates,” said Nora D. Volkow, director of the National Institute on Drug Abuse and a co-author of the THC study. “It can only be explained by the fact that current marijuana has higher potency associated with much greater risk for adverse effects.” Emergency room visits related to marijuana have nearly doubled, from 66,000 in 2004 to 129,000 in 2011, according to the Substance Abuse and Mental Health Services Administration.

Higher potency may also accelerate addiction. “You don’t have to work so hard to get high,” said Alan J. Budney, a researcher and professor at Dartmouth’s medical school. “As you make it easier to get high, it makes a person more vulnerable to addiction.” Among adults, the rate is one of 11; for teenagers, one of six.

Concerns over increasing potency, and rising usage among the young, is giving new urgency to research.

For the Harvard-Northwestern study, published in the April issue of The Journal of Neuroscience, the team scanned the brains of 40 young adults, most from Boston-area colleges. Half were nonusers; half reported smoking for one to six years and showed no signs of dependence. Besides the seven light smokers, nine used three to five days a week and four used, on average, daily. All smokers showed abnormalities in the shape, density and volume of the nucleus accumbens, which “is at the core of motivation, the core of pleasure and pain, and every decision that you make,” explained Dr. Hans Breiter, a co-author of the study and professor of psychiatry and behavioral sciences at Northwestern’s medical school.

Similar changes affected the amygdala, which is fundamental in processing emotions, memories and fear responses.

What is already known is that in casual users, THC can disrupt focus, working memory, decision making and motivation for about 24 hours. “The fact that we can see these structural effects in the brain could indicate that the effects of THC are longer lasting than we previously thought,” said Dr. Gilman, an instructor in psychology at Harvard’s medical school.

The study was preliminary and small, and attempts to replicate it are underway. Meanwhile, Dr. Gilman is trying to figure out how the findings relate to brain function and behavior.

One day in September, she was assessing Emma, a student who said her smoking — almost every day — didn’t interfere with school, work or other obligations. For $100 to go toward study-abroad plans, Emma politely plowed through nearly three hours of tests on cognitive functions that are or might be affected by THC, like the ability to delay gratification (would it be better to have $30 tonight or $45 in 15 days?) and motivation (a choice between computer games, the harder one offering a bigger payoff). For memory, Emma listened to lists of words, repeating back those she recalled. Next came risk. Would she bungee jump? Eat high-cholesterol food? (“These kids tend to be risk takers, particularly with their own health and safety,” Dr. Gilman said.)

A final test: Did Emma crave a joint? Her response: somewhat.

Dr. Gilman is concerned about pot’s impact on the college population. “This is when they are making some major life decisions,” she said, “choosing a major, making long-lasting friendships.”

Dr. Volkow noted another problem: Partying on a Saturday night may hinder studying for a test or writing a paper due on Monday. “Maybe you won’t have the motivation to study, because there’s no reward, no incentive,” she said.

Evidence of long-term effects is also building. A study released in 2012 showed that teenagers who were found to be dependent on pot before age 18 and who continued using it into adulthood lost an average of eight I.Q. points by age 38. And last year at Northwestern, Dr. Breiter and colleagues also saw changes in the nucleus accumbens among adults in their early 20s who had smoked daily for three years but had stopped for at least two years.

They had impaired working memories as well. “Working memory is key for learning,” Dr. Breiter said. “If I were to design a substance that is bad for college students, it would be marijuana.”

This Is Your Brain on Drugs