Will Conservative Factions Fuse Together? 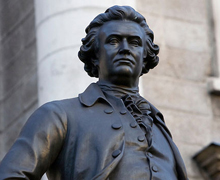 By Brandon James Smith | Conservatives and libertarians must rediscover the things that bind them together. A return to Frank Meyer’s philosophy of “fusionism” could provide a roadmap to unity.

American conservatism is at a crossroads. Yet it is not a question of principles or ideology, as The New York Times editorial board suggests. There is no great need to abandon social issues, or strong national defense, or a defense of the market, or whatever other policies the self-described experts suggest will be the magic cure. American conservatism is, at its core, the fusion of various pro-freedom philosophies speaking in one voice against those who desire a centralized and uniform society.

Conservatism—a term I use here to describe the broader conservative-libertarian movement—has answers to some of the most serious questions facing the United States. Yet the various branches of conservatism are much less willing to unite with one another against the rising progressive movement than they have been in the past. Now, perhaps more than ever, conservatives of all stripes must recommit to a broad alliance or risk losing the battle on all fronts.

In the past, the various factions of conservatism were united in their opposition to the Soviet Union and the rise of communism. The end of the Cold War, brought about by conservative ideas, revealed the fissures among libertarians, traditional Burkeans, the Christian right, and foreign policy hawks. The various factions roughly divide among those who value virtue and tradition and those who value liberty as the primary value or goal. Admittedly, there are many who value both liberty and virtue. Nevertheless, the liberty and virtue paradigm serves as a useful tool in addressing the core differences among conservatives.

Virtue-based American conservatism, like many things worth keeping, has its political roots in the work of an eighteenth century Irishman. Edmund Burke, the father of modern traditional conservatism, boldly rejected the Enlightenment-inspired hubris of those seeking to create heaven on earth. Famous for his strong criticism of the excesses of the French Revolution, Burke never laid out a set of premises or a unified theory of political structure. Rather, his legacy is built on a humble attitude that embraces the complexity of human society and fosters a distrust of those offering perfection of the imperfectible. Thus, Burke emphasized the value of tradition and virtue, the combined knowledge and practices of our ancestors. Because humanity’s political wisdom has evolved over the centuries, Burke noted, tradition can serve us well as we seek to craft just systems of government.

It is this understanding of the limits of human nature and human institutions that causes even modern conservatives to reject the progressive vision of American life. Progressives seek to perfect and centralize a uniform society. To a progressive, such as Woodrow Wilson, humans are mere functionaries whose behavior can be controlled, influenced, predicted, and managed.

By contrast, liberty primarily concerns itself with the ability of individuals to act, uncoerced, as they see fit. Liberty—economic, religious, and political—was the reason so many came to this continent in the first place. Liberty, as the classical liberals approach it, is well described by F.A. Hayek, who defined liberty as freedom from coercion or “the state in which each can use his own knowledge for his own purposes.” Property rights are central to this conception of liberty, as they provide a tangible means of preserving the ability to act free from coercion. There is much more that can be and has been said on the topic of liberty. Suffice it to say that the concept of valuing liberty as the most important political goal seems to be at odds with the views of those who value virtue and tradition above all else.

It was Frank Meyer, an American political philosopher and a co-founder of National Review, who synthesized the two values, calling the synthesis “fusionism.” Virtue cannot exist without liberty, Meyer noted, and liberty is best sustained by a virtuous people. Meyer eloquently argued that there is no way to coerce a virtuous act, because the act of coercion precludes any choice to be virtuous. As Jonathan Adler has pointed out, Meyer was a champion of limited government while simultaneously recognizing the value of virtue in individual life. Meyer accepted “the existence of an objective moral and spiritual order, which places as man’s end the pursuit of virtue, and the freedom of the individual person as a decisive necessity for a good political order.”

Yet the founders agreed with his understanding of the importance of virtue in a free society. Washington argued that virtue was necessary for popular government, and Jefferson asserted the importance of educating the population in habits of virtue. Madison, speaking at the Virginia Ratifying Convention, affirmed that “to suppose that any form of government will secure liberty or happiness without any virtue in the people, is a chimerical idea.” This is not a call to a sort of libertarianism with the language of virtue. Rather, it is an understanding that a free society requires virtue for its sustainability while at the same time, virtue requires the freedom to choose that which is virtuous.  Virtue prevents the hubris of relying on economics alone to order society and allows for a more complete view of human nature.

The American approach is successful in embracing the competing interests of liberty, virtue, and tradition. Madison the federalist is also Madison the fusionist. He sought to manage the inevitable social divisions present in a free society—divisions he saw as inevitable due to human nature. In fact, Madison famously stated in Federalist No. 10 that “among the numerous advantages promised by a well-constructed Union, none deserves to be more accurately developed than its tendency to break and control the violence of faction.” Factions, which Madison described as any number of citizens united by some principle or passion, are inevitable. If left unchecked, they will destroy a free society.

Madison described the three possible responses to factions. First, a system of government could be created that would remove the liberty that allows factions. This is a fundamentally unjust solution. Second, a system of governance could be implemented to force uniform thought and belief. This is what progressives have attempted to do for nearly a century. It is a response that Madison dismisses in Federalist No. 10 as being as impractical as the removal of liberty is unjust. He was right. This is where the unique American approach contributed greatly to civilization and political thought. Madison and the other founders created a system of government that would take a third, better, approach: controlling the effects of factions through the creation of a proper government structure.

The resulting political system was designed to limit the powers of government while empowering the individual to secure his or her own life, liberty, and pursuit of happiness. Powers were separated and checked by one another. Federalism allowed local communities to combat the excesses of a necessary federal government. The separation of powers and the checks and balances provided by the federal system of American government are central to the preservation of freedom. They are the reason that the American experiment has survived.

In the twentieth century, the real-world results of fusionism were positive. In his 1964 convention speech, Barry Goldwater proposed a vision of what fusionism could do for the Republican Party:

This party, with its every action, every word, every breath, and every heartbeat has but a single resolve, and that is freedom – freedom made orderly for a Nation by our constitutional government; freedom under a government limited by the laws of nature and of nature’s God; freedom – balanced so that order, lacking liberty, will not become a slave of the prison cell; balanced so that liberty, lacking order, will not become the license of the mob and the jungle.

The succeeding decades saw what might be described as the golden age of modern American conservatism. Ronald Reagan, who publicly acknowledged his intellectual debt to Frank Meyer, launched his political career because of the path Goldwater carved out. Reagan’s success led to the eventual Republican retaking of the House of Representatives, and the Contract with America. Fusionism’s logic has proven to be both politically prudential and successful.

American conservatism now fights for its identity. After the 2012 reelection of President Obama, conservatives and libertarians have recommenced their war of ideas. The competition is not bad; it even serves to sharpen our ideas. Nor is such internal conflict new to the movement. Whittaker Chambers wrote a scathing review of Atlas Shrugged. Russell Kirk, F.A. Hayek, and even Frank Meyer publicly disagreed with one another regularly. However, unlike that of the 1960s, today’s dissonance is countered by very few strong voices of fusionism. Some within the conservative movement now call for the abandonment of social issues altogether. Others deride the libertarian wing as mentally unstable. And the Tea Party is described using pretty much any negative adjective one can imagine.

Fusionism is overdue for a revitalization. As the fissures within the conservative-libertarian movement grow surrounding foreign policy, the HHS mandate, centralized health care, the NSA, and the judicial redefinition of marriage, fusionism creates a common language for defenders of the Constitution. Conservatives and libertarians must rediscover the things that bind them together in order to confront the resurgence of those who undermine freedom, liberty, and virtue. Working together, conservatives of all stripes can, and will, preserve freedom for the next generation.