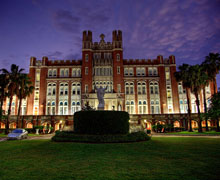 By Cameron McWhirter and Douglas Belkin | Loyola University New Orleans faces a $9.5 million budget gap caused by 25% fewer freshmen this fall than it had expected.

As Loyola University New Orleans gears up for fall classes next month, the 101-year-old Jesuit University faces a crisis: There will be 25% fewer freshmen than the school had banked on.

Getting a targeted number of accepted students to commit to a college’s freshman class—known as the “yield”—has become more crucial for thousands of schools. 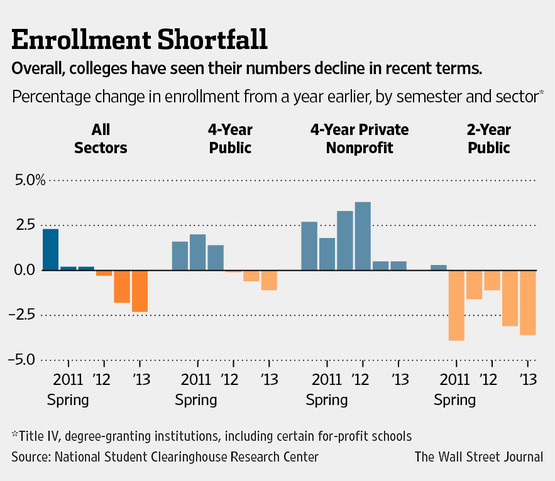 Enrollment rates for numerous smaller and lesser-known colleges and universities are falling this year, due to a decline in the U.S. college-age population, years of rising tuition, increasing popularity of Internet courses and a weak job market for recent graduates.

Now, along with preparing for fall courses, Loyola officials are agonizing about how to plug a $9.5 million shortfall in the school’s $163 million annual budget, the result of 221 fewer freshmen than expected.

Since last May, the 5,000-student private college has imposed a hiring freeze, reduced faculty hours, hired outside firms to revamp its marketing and financial aid, and is setting up early-retirement packages for some faculty. If that isn’t sufficient to fill the gap, the school may tap its $275 million endowment. Layoffs are “a last option,” a spokeswoman said.

Many in higher education believe Loyola might be a harbinger of an ominous trend for second- and third-tier colleges, as well as niche religious, ethnic or gender-based schools.

After decades of growth, college enrollment nationally dropped 2.3% this spring, compared with spring 2012, according to a report released by the National Student Clearinghouse Research Center. The decline is poised to continue. The number of U.S. high-school graduates peaked at 3.4 million in 2010-2011 and is projected to fall to 3.2 million by 2013-14, according to the Western Interstate Commission for Higher Education. The dip in graduates has been particularly pronounced in the Midwest and South.

The result is “a zero-sum game. If someone is up, someone else is down,” said Kevin Crockett, chief executive of Noel-Levitz, a college consulting and marketing firm that specializes in enrollment. “You can stumble a little when the market is growing, but when it’s contracting, the repercussions are magnified.”

While some colleges struggle to fill seats, the country’s most selective ones are becoming harder to get into. Seven of the eight Ivy League schools reported they lowered their acceptance rate for this fall, with Harvard leading the pack by accepting less than 6% of its more than 30,000 undergraduate applicants.

Loyola, located along New Orleans’s St. Charles Avenue next to Tulane University, has set up numerous committees to figure out what went wrong and make sure it doesn’t happen again. The school rebounded after Hurricane Katrina in 2005, growing from about 4,800 students in 2006 to more than 5,000 today—many from out of state. Tuition rose, ranging from 4.9% to 5.9% annual increases from 2007 to this year.

School officials were stunned this year by the low fall turnout, and the vice president for enrollment management resigned abruptly in June. Moody’s Investors Service said this month a downgrade is likely in the school’s credit if “the university is unable to improve operations in a relatively short time frame.”

Loyola officials believe a catalyst for the decline was a reduction in financial aid it offered to the incoming class off its $35,504 tuition, from an average discount of 58% last year to about 55% this fall.

“We tried to moderate that discount rate down somewhat,” Mr. Manganaro said. “I think the market answered back on that.”

Other schools also are having problems. Xavier University of Louisiana, a historically black institution in New Orleans, saw its freshman enrollment for 2011-12 drop to 3,178 from nearly 3,400 in the two academic years prior. As a result, the school “laid off some staff and had a freeze on hiring,” said spokesman Richard Tucker, who declined to disclose this fall’s enrollment.

Kansas Wesleyan University, a small liberal-arts school in Salina, has seen its enrollment drop to about 700 from a high of 900, said its new president, Matt Thompson.

St. Mary’s College, a public liberal-arts college in Maryland, fell about 150 students short of its expected incoming class this fall of 470. In June, the president abruptly announced he was leaving and the admissions leadership was replaced.

And last fall, Morehouse College, a historically black college in Atlanta, announced unpaid furloughs for its entire faculty and staff after it missed that semester’s enrollment target of about 700 students by 30%, said Terrance Dixon, associate vice president of enrollment management. “Yield is the bane of the existence of every enrollment manager in the country,” Mr. Dixon said.