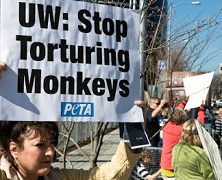 By John Stonestreet | Our nation’s universities have long prided themselves on serving as forums for open and free exchange of ideas. But a growing trend in schools throughout our nation is threatening to put an end to that legacy, at least for evangelical Christians. Let me explain.

Earlier this year Chuck Colson and Eric Metaxas told you about events at Vanderbilt University, where they recently adopted “anti-discrimination” regulations. These would require student groups to allow anyone—regardless of beliefs or behavior—to obtain group membership and seek leadership positions. As Eric pointed out in April, this amounts to an attack on these groups’ right to exist.

To borrow his example, such regulations would theoretically force a university chapter of People for the Ethical Treatment of Animals (PETA), to allow steak connoisseurs and fur enthusiasts into their ranks and leadership. This may not sound like such a big deal, until you realize that even a small cohort of these “fur-draped carnivores” could tip the membership scales and vote the group into extinction.

Well, PETA likely doesn’t have much to fear from these regulations—but Christian groups do. Increasingly, they’re being singled out with policies which David French, senior counsel for the American Center for Law and Justice, calls “absurd.”

And it’s not just happening at Vanderbilt.  Schools nationwide like Brown, Colby, Amherst, Williams, Bowdoin, and the Universities of Maine and North Carolina have all pursued similar policies.

Now the latest, Tufts University in Massachusetts, is getting national press coverage as a kind of epicenter for the controversy.

Tufts’ chapter of InterVarsity Christian Fellowship is 120 members strong, and has been a model of Christian openness and tolerance for years, welcoming members with a variety of beliefs, including some from the LGBT community.

But a recent ruling by the Tufts student judiciary revoked InterVarsity Fellowship’s status as a university group on the grounds that its constitution requires leaders to celebrate “the basic truths of Christianity,” as well as to practice sexual chastity.

The university’s decision implements the logic of one of the worst Supreme Court rulings in years. In the 2010 case Christian Legal Society v. Martinez the court essentially held that religious groups must place no stipulation on the beliefs of members. In other words, they’re not allowed to define themselves according to their defining beliefs.

Greg Jao, national field director of InterVarsity Christian Fellowship, called this reasoning in the case of Tufts “illogical, and a little bizarre.”

“Groups can only exist,” he says, “if their leaders can affirm the reason for that group’s existence.”

As we’ve pointed out before on BreakPoint, atheist groups on campus would not appreciate the university forcing them to allow Christians into leadership positions. Gay and Lesbian clubs would not take kindly to opponents of same-sex “marriage” filling their seats and running for president. By the same token, Christians must have a right to exercise our beliefs in public and tangible ways. And yes—that means being able to police both membership and leadership according to the group’s beliefs.

Otherwise, as Jao noted, there’s little point in having the group at all.

Folks, this is political correctness run amok. And as French noted, it actually ends up destroying, not preserving, diversity. But that may be exactly what some school and student officials at Tufts and elsewhere have in mind.

This is why we must defend the real meaning of religious freedom on all fronts against redefinition. True freedom does not end when we leave church, and that’s not what America’s founders had in mind when they wrote the First Amendment. We must be free to gather together and express our faith in the statehouse, the marketplace, and especially the halls of academia.