Party Polarization Signals the End of the 100-Year War 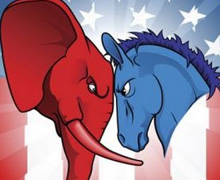 By James R. Rogers | The polarization of Congress is much-discussed among journalists, commentators, and political scientists. The fact of congressional polarization seems true, as can be seen from the figure below, taken from the National Journal. In 1982, 344 of 435 House members were ideologically positioned between the most-liberal Republican House member and the most-conservative Democratic House member. Defined this way, almost 80 percent of the House members shared the congressional “middle” at this time. Thirty years later, eleven House members, less than 3 percent of the House, share this same middle ground.

I’m of course open to good theory and good evidence on any front. My own arm-chair hypothesis is that U.S. political parties became more-ideologically homogeneous (and hence polarized) as a result of generational change—the dying off of the last generation of voters whose partisan affiliation was significantly influenced by residual Civil War loyalties.

I saw the remnant of “yellow-dog” Democrats—Democrats who would vote for a yellow dog rather than a Republican—during the very first year I moved to Texas. Traveling in rural Texas I glimpsed a campaign sign with a name on it and under the name the campaign slogan, “Conservative Democrat for State Legislature.” I never saw anything similar after that first year in Texas. So, too, the Republican party used to have a sizable liberal wing as well, centered mainly, although not exclusively, in the Northeast. Even though over one hundred years after the end of organized military conflict, regional partisan affiliations were still driven significantly by passions spawned by the Civil War.

But while resentments might remain, people do not. Three generations of partisan resentment and partisan loyalty was apparently enough. As the third generation after the war began to pass during in the 1970s and 1980s, children of folks who identified as conservative Democrats maintained their ideology but changed their partisanship and identified as conservative Republicans. And children of liberal Republicans kept their ideology but changed their partisan affiliation, and identified instead as liberal Democrats. (Not all children of course, but enough.) One hundred and twenty years after the war, ideological affiliation began to align more closely with partisan affiliation. But as partisanship becomes increasingly aligned with ideology, “polarization” occurs naturally. My own inclination is to ascribe Newt Gingrich and the 1994 congressional revolution as a reflection of this trend rather than as a cause of it.

Some commentators and politicians lament the rise of ideological parties in Washington. They pine for the Washington D.C. of the 1950s in which partisanship did not map so neatly onto ideology, and resulted in a politics that was kinder and gentler than it is today. They want a return to the days of their youth when Washington politics was fun. This way of thinking, however, treats polarization as the aberration. If my hypothesis is correct, then in point of fact the century or so of ideologically-mixed partisanship prompted by the Civil War is the aberration. One could think that political parties are natural focal points for ideologically like-minded voters and politicians. If so, then the polarization that we observe today is simply a move toward a more-normal electoral context as a result of the dissipation of partisan habits disrupted by the residual passions of the Civil War.

To be sure, we can debate whether ideologically-aligned political divisions are good or bad for the country. My initial inclination—again subject to revision as our experience with it grows—is that party “polarization” promotes electoral accountability: Voters know which party prompted the recent, partial shut-down of the national government, and voters know which party is responsible for Obamacare. In that context, may the best party win. Nonetheless, increased partisan accountability sits in tension with the slower, back-slapping way of policy-making and debate in Washington during the 1950s. I don’t begrudge either politician or commentator who personally misses that era. But my own inclination is to reject the notion implicit in their lament, that simply because politicians and journalists enjoy today’s Washington politics less today than they did decades ago, that today’s politics is perforce bad for the country or for democracy.