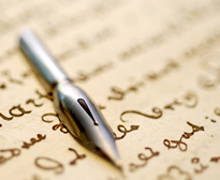 By Alan Jacobs | So, about having ideas worth expressing. Let me start by working my way through this passage from C. S. Lewis on the value of reading old books:

Every age has its own outlook. It is specially good at seeing certain truths and specially liable to make certain mistakes. We all, therefore, need the books that will correct the characteristic mistakes of our own period. And that means the old books. All contemporary writers share to some extent the contemporary outlook — even those, like myself, who seem most opposed to it. Nothing strikes me more when I read the controversies of past ages than the fact that both sides were usually assuming without question a good deal which we should now absolutely deny. They thought that they were as completely opposed as two sides could be, but in fact they were all the time secretly united — united with each other and against earlier and later ages — by a great mass of common assumptions. We may be sure that the characteristic blindness of the twentieth century — the blindness about which posterity will ask, “But how could they have thought that?” — lies where we have never suspected it, and concerns something about which there is untroubled agreement between Hitler and President Roosevelt or between Mr. H. G. Wells and Karl Barth. None of us can fully escape this blindness, but we shall certainly increase it, and weaken our guard against it, if we read only modern books. Where they are true they will give us truths which we half knew already. Where they are false they will aggravate the error with which we are already dangerously ill. The only palliative is to keep the clean sea breeze of the centuries blowing through our minds, and this can be done only by reading old books. Not, of course, that there is any magic about the past. People were no cleverer then than they are now; they made as many mistakes as we. But not the same mistakes. They will not flatter us in the errors we are already committing; and their own errors, being now open and palpable, will not endanger us. Two heads are better than one, not because either is infallible, but because they are unlikely to go wrong in the same direction. To be sure, the books of the future would be just as good a corrective as the books of the past, but unfortunately we cannot get at them.

This is a brilliant passage, which I want to endorse almost wholly — just with some relatively minor adjustments. When CSL speaks of “the characteristic blindness of the twentieth century” he means “the characteristic blindness of somewhat-to-highly educated Westerners in the twentieth century.” Had he met people from China or Kenya or Saudi Arabia or Indonesia who had not been educated in the Western style, he would have found without leaving his own time considerably greater intellectual diversity than he experienced in England.

The key point here is: get out of your comfort zone, your echo chamber. But don’t do so by seeking out the crowd-pleasers and rabble-rousers from outside your typical group (unless you’re trying to understand sociological phenomena). If you’re a conservative who wants to understand liberalism, don’t bother with Michael Moore; if you’re a liberal who wants to understand conservatism, don’t bother with Sarah Palin; if you’re an unbeliever who’s curious about Christianity, ignore Joel Osteen; if you’re an orthodox Christian trying to get a fix on atheism, steer clear of Bill Maher.

If you seek out what’s strange to you in its better expressions, several things will happen. First of all, you’ll court being changed by the encounter, having your views altered, perhaps in significant ways. You’ll learn that the people who disagree with you are almost certainly, taken as a whole, morally and intellectually the equal of the people you agree with. (Just like those people from the past whom Lewis commends to us.) You’ll probably come to realize that any question that is fiercely debated is fiercely debated because there aren’t simple and obvious answers to it. You’ll find it harder to enjoy the simplistic, cheap pleasures of Bulverism.

Let’s be clear about this: if you follow my advice, in the short run you’ll find it harder to express your ideas because you’ll be less sure what they are. It’ll be tempting to fall back on prefabricated assumptions, intellectual clichés that do the same work as linguistic clichés. Thus George Orwell:

A scrupulous writer, in every sentence that he writes, will ask himself at least four questions, thus: 1. What am I trying to say? 2. What words will express it? 3. What image or idiom will make it clearer? 4. Is this image fresh enough to have an effect? And he will probably ask himself two more: 1. Could I put it more shortly? 2. Have I said anything that is avoidably ugly? But you are not obliged to go to all this trouble. You can shirk it by simply throwing your mind open and letting the ready-made phrases come crowding in. They will construct your sentences for you — even think your thoughts for you, to a certain extent — and at need they will perform the important service of partially concealing your meaning even from yourself.

If you’d prefer to let easy, simplistic categories and assumptions “think your thoughts for you,” then stay within the familiar orbit of those who think and say only what you’re already prepared to hear. But if you want to have thoughts worth expressing, you’re going to have to take the risk of being slowed down and even seriously altered.

But if you do take this risk, you’ll learn a lot. For one thing, if you read the best and most serious proponents of alternative views, of other cultures, of other times, you’ll likely be driven to seek out the strongest voices for your own views. You’ll find out whether your own tradition is all that you thought it was, and maybe you’ll learn that it had even greater resources than you had expected. But however that works out, you’ll gain the inestimable benefit of coming to see (and, I hope, to embrace) the full humanity of those who think very differently than you do. This is the royal road towards the greatest of virtues. As Iris Murdoch once wrote, “Love is the extremely difficult realization that something other than oneself is real.”