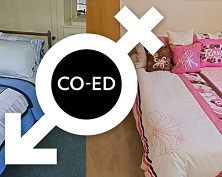 By Publius | News Report from NewsandObserver | Starting next fall, students at UNC-Chapel Hill will be able to live in dorm suites and campus apartments with suitemates of the opposite sex.

The UNC-CH Board of Trustees unanimously endorsed “gender-neutral” housing after a yearlong push by students who said the move was necessary to give gay, lesbian and transgender students a place free of harassment.

“We have, I think, a commitment and an obligation to our students that if we admit them to the University of North Carolina, that we have to provide them with a safe place to live and study,” said Alston Gardner, a trustee from Chapel Hill.

At the trustee meeting Thursday, more than a dozen students gathered in the back of the room, holding a large sheet painted, “EQUAL HOUSING NOW.” They cheered at the vote by trustees.

“I’m speechless,” said Laura Carroll, a sophomore from Charlotte, who has worked on the initiative for a year. “I didn’t expect things to happen so fast.”

Gardner said the new housing option would involve a relatively small number of suites and apartments on campus. Students will be able to apply for the option of choosing suitemates or apartment mates of either gender. The university already has coed dorms, but students of the opposite sex do not share suites.

Students of the opposite gender will not be allowed to live in the same rooms, but can share common living areas and bathrooms in suites and apartments.

That kind of flexibility is important for gay and transgender students and others who sometimes face social isolation, students said. For example, a gay male student might feel more comfortable living with female friends, or vice versa. A transgender student could choose roommates based on the gender with which he or she identifies.

The thought of coed dorms was shocking to many in the 1980s, and now, the idea of male and female students sharing bathrooms and living spaces may catch some parents and alumni off guard.

But such policies have mushroomed in the past five years or so, said Emily Glenn of the Columbus, Ohio-based Association of College and University Housing Officers-International.

“It’s gradually been increasing as an option on campuses,” she said, though she predicted that many universities will never take the step.

Glenn said while the option is attractive to gay students, others take advantage of it, too. “Sometimes a guy and a girl are just friends and they’d rather room together than with anybody else.”

Fears of couples rushing to “shack up” have generally been unfounded, Glenn said. She cited this deterrent: “If you break up, you might have to end up living together for a while if we can’t move you.”

“At one point we’re going to look back at gender-segregated housing in the same ways that we do now on gender-segregated residence halls … or segregation on the basis of race/ethnicity,” Phoenix said. “I think that future generations just don’t see this as a big deal.”

Chancellor Holden Thorp supported the student proposal last year but declined to implement it because he said the university needed to educate “external stakeholders” on what could be a controversial issue. On Thursday, he congratulated the student activists and said the new housing option would be implemented next fall.

“This is an important project for the university and one that I think is vital to protecting the safety of our students,” Thorp said. “We all know about the tragic incident that happened at Rutgers a couple of years ago.”

Thorp was referring to the 2010 suicide of Tyler Clementi, a student at Rutgers who committed suicide in a case of gay bullying by his roommate.

“It feels so good to be a Tar Heel right now,” Ping Nguyen, a UNC-CH junior from Rock Hill, S.C., said after the trustees’ vote.

Nguyen said he tells prospective students that they can make a difference at UNC-CH. “This is a school that with hard work and effort and determination, you can make change – effective change. I just am so happy. I’m overwhelmed.”