Winning Takes Care of Everything 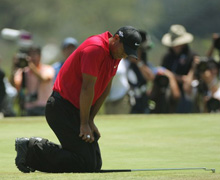 By John Stonestreet | Our New Heroes | Most of you will recall several years ago when golf superstar Tiger Woods took a nose dive. The man who had the world at the tip of his putter lost respect, fame, millions in sponsorships and, of course, his wife after revelations surfaced of various and tawdry extramarital affairs. Despite Woods’ profuse apologies to fans, colleagues, and competitors, his career was in the rough, and no one knew how long it would take him to get back on his game—professionally or personally.

Four years later, Woods has made a comeback and has had little trouble racking up enough victories to reclaim not only his number one ranking in the sport but also the sponsorships.

Of the few corporate sponsors that stuck with him through those troubled days, Nike may deserve its own award for sheer tenacity and guts—especially in advertising. One controversial commercial, which the company aired shortly after the scandal, shows Woods clad in the Nike hat and shirt as his late father, Earl, asks his son if he learned anything from his experiences. Tiger doesn’t reply.

This year, on the heels of Woods’ latest victory, Nike has taken an even bolder shot with a single image released on Twitter and Facebook sporting the caption, “Winning Takes Care of Everything.”

This, of course, has been the catchphrase Woods has been using for years to silence critics of his game. But as Washington Post columnist Cindy Boren points out, in this context, just as Woods’ career is taking off again, Nike’s implication is all but stated: His delivery on the golf course compensates for his indiscretions in private. Athletic victory is far more important than moral character.

Woods himself has said nothing about the ad, and it would be wrong to speculate about his feelings. But this instance of “Nike being Nike” as one sports marketing consultant told USA Today, might reflect a far broader trend in our culture—one that reaches beyond golf or even professional sports into the realms of entertainment, business and politics.

Our heroes are changing, and you can see it all around us. The generation of Jackie Robinson, the Lone Ranger and Mr. Smith Goes to Washington has given way to vampire boyfriends, doped-up athletes, and politicians whose moral indiscretions do little to damage their popularity or influence. Nike’s daring ad reminds us that the assumption of moral success going hand-in-hand with professional success is a thing of the past.

Not that we’ve completely given up on the old kind of hero. I mean, we still admire the honest athletes of the world, the consistent Tim Tebows and especially the courageous first responders who rescued bombing victims in Boston last week.

But alongside these timeless role models of generations past, a new breed of hero has cropped up: brazen, volatile, self-absorbed, often promiscuous, and proud of it.

I was reminded of this when reading a profile last week in the Washington Post on former NBA great Allen Iverson. Throughout his career, Iverson personified this new type of hero, most famously in a post-game rant against his coach Larry Brown who had criticized his bad practice habits and sense of entitlement. At the time, sports analysts and commentators defended Iverson for his independence and “don’t care what anyone thinks” attitude.

But today, they pity him. Iverson, who made millions and was probably the best player ever of his size, is now broke and lost, according to the Post profile. Having been enabled in his delusions of self-importance without responsibility, he has no idea what to do now that he can’t play basketball anymore. It’s a sad story, and indicative of the fact that a culture that leaves moral clarity out of the equation for a hero does even the heroes themselves a grave disservice. The assumptions of Nike and of our culture, that somehow winning fixes everything, and that moral integrity just can’t compete with a good swing, is delusional. It just isn’t true—not today, not ever.