Will We Keep Our Religious Liberties? 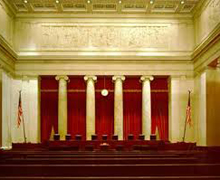 By John Stonestreet | On the Tuesday before Thanksgiving, the Supreme Court agreed to hear Sebelius v. Hobby Lobby, the challenge to the HHS mandate brought by a Christian-owned family business based in Oklahoma.  It’s also agreed to hear a related case, Conestoga Wood Specialties v. Sebelius, which involves the issue of whether a business, as well as its owners, has a right to religious freedom under the First Amendment.

While most commentators have treated the news as part of the larger story about the legal challenges to the Affordable Care Act, the far more important story is the battle for religious freedom.

Two thousand and fourteen is shaping up to be a momentous, perhaps even defining, year when it comes to religious freedom in the United States. What’s at stake in these cases goes far beyond healthcare—it’s about what we mean when we say “freedom of religion.”

The trend over the past decade has been to equate “freedom of religion” with “freedom of worship,” that people are free to believe—or not believe—whatever they want. And with a few exceptions, they may also practice with other like-minded people whatever rituals they think their belief requires of them, provided these rituals remain private.  Once they cross the threshold of the church or their home, however, the ability to put their beliefs into action is increasingly circumscribed.

As a New Mexico Supreme Court justice wrote this past summer, for religious believers, compromising “the very religious beliefs that inspire their lives” and “[channeling] their conduct, not their beliefs, so as to leave space for other Americans who believe something different” is the “price of citizenship.”

It should be noted that the requirement to “leave space” and “channel conduct” only flows in one direction: non-believers are under no similar obligation.  And so, we’ve arrived at a point where what once was considered the “first freedom” is now, at best, a second-class right that can be set aside at the behest of the currently-favored interest group.  That’s why the upcoming Supreme Court cases are so important. The Court can either solidify religious freedom’s second-tier status or, hopefully, arrest its slide. It can either sign on to the fallacious distinction between belief and conduct or insist that the First Amendment requires reasonable accommodation to “the very religious beliefs that inspire [people’s] lives.”

Needless to say, we must be in prayer about this momentous issue, not only concerning the cases, but more importantly, our response to this challenge. As Chuck Colson said concerning another important Supreme Court case, “the Supreme Court justices don’t live in a sheltered cocoon. They read newspapers, editorials, and letters-to-the-editor. So Christians ought to be talking publicly about what’s really at stake.”

We didn’t need television networks and activists of various stripes to teach us about tolerance. We fully knew that people disagreed with us on some, if not most, issues and yet we—and they—could treat each other with respect.

This kind of tolerance has been replaced by a relentless scrubbing of an ever-growing public square of any dissent from the reigning secularist orthodoxy. “Secularist,” in this case doesn’t mean “non-sectarian,” as it does, for example, in India. It means hostility to religion itself, especially when it escapes the confines of worship services.

This is the landscape in which the battle for religious freedom will be fought this year….