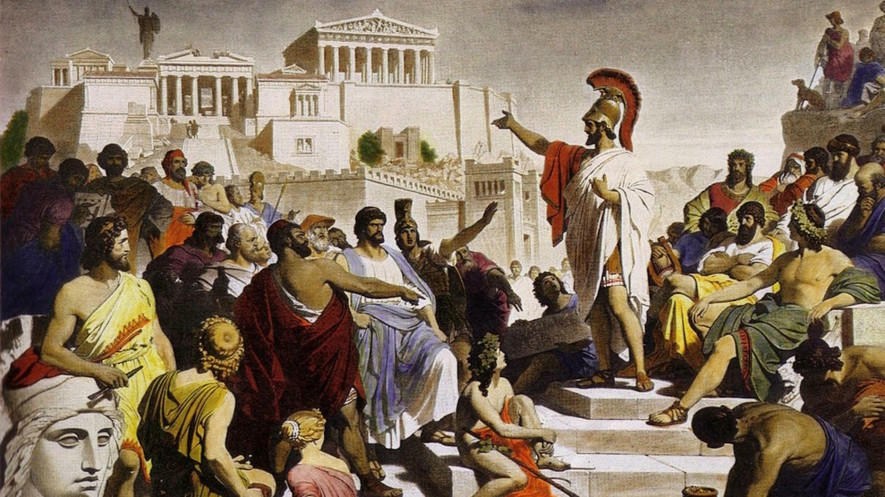 As the United States muddles through a global pandemic and the aftermath of a contested election, it is hard to avoid a sense that the country is now suffused by a spirit of grievance and revenge. Donald Trump’s call to “make America great again” has given rise to the cynical response, voiced by Andrew Cuomo and others, that “America was never that great.” Even libertarians and many traditional conservatives have come to see talk of greatness as little more than a smokescreen for an aggressive foreign policy and an interventionist state. Unfortunately, none of the parties to this debate appear to fully grasp the vital role that conceptions of civic greatness play in sustaining a free society.

In this context, the legendary Harvard philosopher Alfred North Whitehead once made an unusual comment about the culture of freedom. In 1933, surveying a political landscape wracked by the Great Depression, Whitehead rather bizarrely suggested that the preservation of freedom in the West might require a public culture that could replace the religious symbolism of the Book of Revelation with political symbolism of the “speech of Pericles to the Athenians” from Thucydides’ History of the Peloponnesian War. Strange as this juxtaposition may appear, Whitehead had a very simple, and very timely, point to make.

He argued that Western notions of political freedom are largely an outgrowth of the Christian religious tradition that conceives of universal moral standards and insists on the equal dignity of every individual soul. This egalitarian universalism opens the intellectual space for conceptions of human rights, classical liberalism, democracy, democratic socialism, and many other forms of modern politics. So far, so good.

However, Whitehead also thought the Christian legacy had a darker side, because its moral vision of the world can sometimes foster feelings of resentment against inequality, which stubbornly persist despite our best efforts, as well a spirit of revenge against those who transgress the moral law. Whitehead saw these more destructive aspects of the Christian legacy exemplified by the apocalyptic tenor of the Book of Revelation, in which the Lord punishes transgressors in a culminating act of sovereign power. His point is that a political culture of resentment and revenge remains an ever-present temptation in societies that explicitly cherish equality and universality, even when those values take on a more secular garb, as is the case in nearly all contemporary democracies. Paradoxically, the same values that create the culture of freedom can undermine it by pitting citizens against one another in a cycle of retribution.

For just this reason, Whitehead was fascinated by Pericles’ funeral oration, delivered in 431 BC to honor Athenian soldiers killed during the first year of the Peloponnesian War with Sparta. He understood that the address, perhaps the most famous speech in Western history, provides an account of a democratic polity in which a shared conception of political greatness helps to offset feelings of resentment and moralistic revenge. The upshot is that equality and universality may not be enough to sustain a culture of freedom: these moral values require a political supplement, and that supplement is civic greatness.

The Athenians were facing difficult circumstances when Pericles, whom Thucydides calls “the first citizen of Athens,” was called to speak in honor of the dead. Sparta had ravaged the fields surrounding Athens early in the war, destroying the property of numerous citizens, and many promising young men had already perished. Nevertheless, he used the opportunity provided by the eulogy to tell the Athenian citizenry a story about their own greatness that allowed them to see their suffering as something to be borne together, with honor and dignity.

Surprisingly to modern readers, Pericles begins by declaring that the first place of honor must go, not to the fallen soldiers, but to those distant ancestors who founded the state, and secondly, to their own fathers who preserved and increased this inheritance. This is a complex rhetorical move, and the purpose of dwelling on the achievements of the ancestors is severalfold. One goal is to clarify the obligations that stretch across the generations, creating a longer time horizon that makes it possible to sacrifice immediate self-interest in favor of a common good that will only be realized in the future, when many of those in the audience, like the fallen soldiers, will no longer be living. This generational vantage point is a necessary counterweight to democratic cultures that privilege short-term gratification in a way that impedes collective action.

Second, praising the founders is designed to activate feelings of pride in the audience—but to do so in a manner that enlists self-interest in the service of the common good. Notice that Pericles’ reference to the achievements of previous generations is not at all nostalgic, because it does not portray the past as a golden age to which Athens should return, nor does he suggest that its greatness has been unfairly stolen by fate or some foreign rival. To the contrary, the reference to the founders is designed to confront those in attendance with a great achievement and then dare them to surpass it with their own deeds. From this perspective, Pericles insinuates that Athens remains great precisely because it has been given the opportunity to preserve and, with luck, exceed what has come before. The point is to encourage a prideful, self-interested citizenry to win glory by competing for the common good.

In short, Pericles is intentionally sketching a story about the Athenian past that makes it “useful” for those still living. Of course, he knows quite well that much of this praise is an embellishment, something he tacitly concedes when he refers to the “evil” deeds of previous generations. “Everywhere,” he declaims, “whether for evil or for good, we have left imperishable monuments behind us.” The ancestors, whatever their achievements, also committed grave injustices, made mistakes, and fought amongst themselves. Does this fact mean that Pericles is telling a lie about Athenian greatness? Should the imperishable monuments be torn down? Is he trying to obfuscate the plain truth that “Athens was never that great”?

Not necessarily. For one thing, exaggerated condemnation of past injustices is no more truthful than exaggerated praise. More importantly, a cynical fixation on past wrongs, even if it were somehow more truthful, would not only fail to honor the sacrifices made by countless Athenian citizens, but such disparagement would also have a corrosive effect on the entire body politic. The time horizon would contract, and each individual would be encouraged to look only to himself, since personal sacrifices on behalf of such a corrupt regime would be both pointless and morally dubious. Cynicism would also play upon the listeners’ pride in a destructive way, turning self-interest toward a search for blame and urging them to compete in exacting vengeance. But the truly democratic spirit, Pericles suggests, depends on a willingness to overlook certain things. Democratic societies recognize that men are flawed, but also believe that a man’s “merit as a citizen more than outweigh[s] his demerits as an individual.”

Pericles goes on to praise the written laws that make Athens great. He claims that social status in Athenian society depends upon merit, not inherited wealth. Moreover, its democratic government “favors the many instead of the few” and enables citizens to freely pursue their own interests and talents. Again, it is easy to see that the democratic ideal Pericles is describing is not, strictly speaking, true. Athenian society was always stratified by gender and class, in addition to holding thousands of slaves in bondage.

Nevertheless, Athens was more egalitarian than virtually any other society in the ancient world, and its free citizens played a greater role in public life than the population of any 21st-century democracy. That imperfect achievement is worth praising. More to the point, it is just this fictional account of democratic equality that sustains the political ideal, keeping the standard alive as something to be realized in the future. If the Athenians were to accept that politics everywhere is simply about power and self-interest, they would risk destroying the ideal.

Finally, Pericles insists that the democratic spirit extends beyond explicit laws to include the unwritten habits of collective life. He says that Athenian democracy is unique because “far from exercising a jealous surveillance over each other, we do not feel called upon to be angry with our neighbor for doing what he likes, or even to indulge in those injurious looks which cannot fail to be offensive….” Public condemnation of law-abiding fellow citizens, though not contrary to (and indeed protected by) the law, necessarily sparks offense and wounds pride. In turn, wounded pride creates factions, and factions fight. Conversely, the properly democratic form of tolerance practiced in Athens minimizes factional conflict by encouraging citizens to refrain from indulging in petty insults or moralistic contempt when one’s neighbor happens to do what he likes.

Relearning these lessons has never been more important. The funeral oration shows that individual self-interest and the spirit of retribution for past wrongs can be redirected toward the public good precisely because the citizens of Athens are tied together by a common history that extends across the generations, by shared narratives, and by a common quest for civic greatness. In America as in Athens, the alternative is factional infighting and political decay.