Why Are Wages for Young College Grads So Terrible? 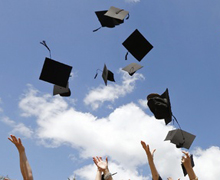 By Derek Thompson | Forget about the mythical throngs of Ivy-educated baristas. Companies have essentially frozen entry-level salaries for even the smartest graduates.

When young people do things that confound the rest of the country—like take forever to find their own place, delay marriage, stop having kids, stuff like that—some analysts turn to young-adult psychology or brain-destroying technology for an explanation.

There’s a better (albeit less sexy) story. More young people are grabbing debt to go to college, but they can’t punch the ticket to full-fledged adulthood, because college-grad wages are growing at historically pitiful levels. In fact, the incomes of recent college grads are growing so glacially that they make the rest of the country look like we’re discovering $100 bills in our coat jackets every morning. 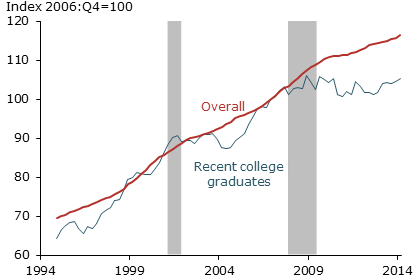 College-grad wages hit a wall. Why?

Perhaps the most obvious—and most commonly offered—explanation is that the recession has forced the entire youth generation to become a collective of baristas, fast-food workers, part-time artists, and otherwise “under-employed” people. (Under-employed typically means working at a job that requires less than your education.)

This explanation isn’t merely incomplete. It’s almost certainly wrong. The share of recent college grads who are under-employed is higher than normal, but it’s not that much higher than the long-term average. 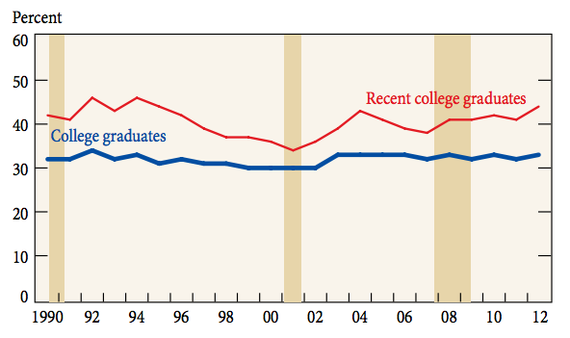 And as we’ve explained before, the recent growth of part-time work is mostly about the legacy of the recession. 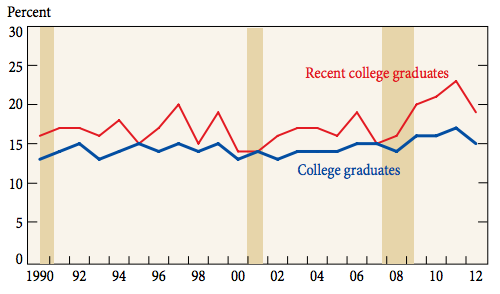 This week, the Obvious Story received another data blow when the San Francisco Fed found that wages in typical college-grad jobs—young white-collar professions like paralegal work, advertising, and accounting, or higher-paying fields like management, business, and finance—are actually growing even slower than wages for all college grads, combined. Since 2007, overall wages are up 15 percent (not adjusted for inflation), young grads’ wages are up 6 percent, and young-grads-in-business-and-finance are up 2.6 percent.

What this doesn’t mean? It means that, although there are slightly more NYU-educated baristas and part-timers than usual, the reason young people aren’t making as much money as they expected coming out of school is mostly the result of professional industries freezing entry-level salaries for college grads. It’s the overall weakness in the labor market, possibly exacerbated by the glut of college graduates looking for work, that’s pushing down the average wage of bachelor’s-degree holders.

Why Are Wages for Young College Grads So Terrible?