Who are the Casualties in the War on Poverty? 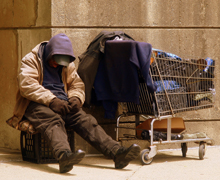 By John Stonestreet | It’s been fifty years since President Johnson declared a “War on Poverty.” So who won?

Jesus broke the social stigmas of His time by snubbing those who loved riches and fraternizing with the poor and outcast. Because of this, Christians recognize a call to identify with and help those in poverty, and this is one of the great contributions Christianity has made to the world. But there’s much disagreement on how best to do that, especially during the last few generations in the United States.

Beginning in 1964, President Johnson and lawmakers set out to “eradicate poverty as we know it” through a series of government programs such as Medicaid, Medicare, Head Start, and Food Stamps, all of which date back to the Great Society.

But things didn’t go as expected. Not only did poverty remain with us, but as Dr. Jay Richards of the Institute for Faith, Work and Economics explained to me in our latest edition of “BreakPoint This Week,” LBJ’s “war” and subsequent laws passed in the same spirit have done much more to entrench poverty than eradicate it.

In his book, “Money, Greed, and God,” Dr. Richards explains that despite nearly twenty trillion dollars of federal funds directed at lifting Americans above the poverty line, a steady percentage have remained there. What was once a temporary problem for many has become systemic and multi-generational.

Poverty, Dr. Richards says, is more than a financial state of being.

The decline of marriage is a prime example. The rate of out-of-wedlock births and broken families, particularly in the inner-city, has skyrocketed since 1964. Some “War on Poverty” programs actually discourage couples from getting married and becoming financially independent.

Laws passed with good intentions created dependency and undermined the culture of marriage. And this type of poverty is more insidious than just a lack of money. It’s what some call “relational poverty,” and it destroys families, and undermines communities.

The “War on Poverty” failed to achieve President Johnson’s objectives, and it proves that one-size-fits-all government programs won’t cut it.

Does that mean we should abandon welfare efforts altogether and let the poor fend for themselves? Well, that’s neither smart nor Christian, says Richards. The government certainly does have a role to play, but to understand the extent of that role we’ve got to go back to God’s design, particularly to the spheres of society He’s ordained to work alongside government—like the family and the Church.

This is where the idea of “subsidiarity” comes in, which means that problems are most often best dealt with by those institutions closest to the problem. So those closest to an instance of poverty best know what is happening in their community, which “solutions” could work, and which ones will make it worse.

A family, a pastor, a congregation, teachers, volunteers—these individuals know the faces of poverty better than anyone in the halls of Washington. For them the poor aren’t statistics—they’re real image-bearers with real needs.

One of the worst effects of the “War on Poverty” has been its tendency to out-compete churches and private charities with government programs—the same programs that create generational spirals of poverty. Over the last fifty years, Dr. Richards says, the efforts of charities and churches to help the poor have atrophied. That’s got to change, and he points to exciting examples of congregations whose members are declaring a new war on poverty right in their neighborhoods.

It’s a first step to what he says will be a long-haul campaign—not only to repair the causes of poverty, but to regain the Church’s moral credibility to talk about poverty in a nation whose war ended in defeat.