Those Weirdos with Lots of Kids: Fecundophobia Defined 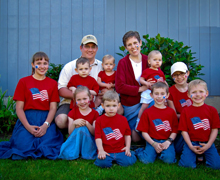 By John Stonestreet | According to the National Institute of Mental Health, 6.3 million of us have a diagnosed phobia—that is, an irrational, sometimes even debilitating, fear of something.

Sometimes, however, the word phobia is used as a pejorative, such as when those of us who oppose redefining marriage are labeled as homophobic, as if the only thing behind our opposition is an irrational fear of homosexuals!

In that spirit, the irrepressible—and definitely fearless—Mollie Hemingway has identified another phobia: fecundophobia, the irrational fear of—or, better, contempt for—people who have lots of kids. In other words, those who don’t like people unusually fertile or fecund.

In her recent article at The Federalist, Hemingway points to a headline in the sports blog Deadspin about San Diego Chargers quarterback Philip Rivers, whose wife is about to give birth to their seventh child—unusual, perhaps, in these days of “family planning,” but definitely not weird.

Deadspin, however, over a video showing Rivers’ intense reaction to a Chargers field goal, says, “Philip Rivers is an intense weirdo.” Now lots of players make funny faces in the stress of NFL competition, as Rivers does in the video, so that couldn’t be the only reason why Deadspin labeled him a weirdo. “He’s also about to have his seventh kid,” the blog added snarkily. “There are going to be eight people with Rivers’ DNA running around this world.”

And precisely what does the fact that Rivers will have seven little tributaries running around have to do with anything?

No wonder she calls this irrational treatment of Rivers fecundophobia! Hemingway writes, “The media remind us regularly that the most important cultural value relative to family life is what’s euphemistically called ‘choice.’ So why the weird reaction to people receiving children as a blessing instead of fighting them tooth and nail with hormones, chemicals, surgery and scissors?” Yes. Why indeed?

Could it be that the presence of children in large, happy families is an affront to the conscience of a culture that has allowed, with very little protest, the abortion of 55 million unborn children? In a culture that has decided that children are impediments to our own pursuits of happiness?

Time magazine recently ran a cover story entitled “The Childfree Life: When having it all means not having children.” Time interviewed several women who were “childfree”—rather than childless—by choice. One of them said, “My main motive not to have kids was that I loved my life the way it was.”

Or maybe it’s a misguided worldview that sees children as destroyers of Planet Earth and its limited resources. At a high school in Indiana, to cite a single example, some environmental zealots have just posted a sign: “Zero Population Growth: No More Than Two—It’s Up to You.”

As Chuck Colson said, if you want to see whether a worldview is true, push it to its logical conclusion. Fecundophobia is the logical conclusion of the worldviews of naturalism (that humans came about by chance and are nothing special) and hedonism (that salvation comes through our pursuit of pleasure). Of course, fecundophobia proves that these worldviews are self-defeating. Because if everyone adhered to them, they would eventually disappear, because there would be no humans left to espouse them in the first place.