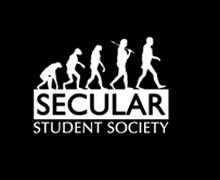 Editors Note:  Free Think University is about free thinking, not about a specific ideology.  The following two part blog repost is being shared with our readership to keep them abreast of any group seeking to promote freedom of thought.  FTU is not promoting the SSA, but rather promoting our common goal of free thinking. 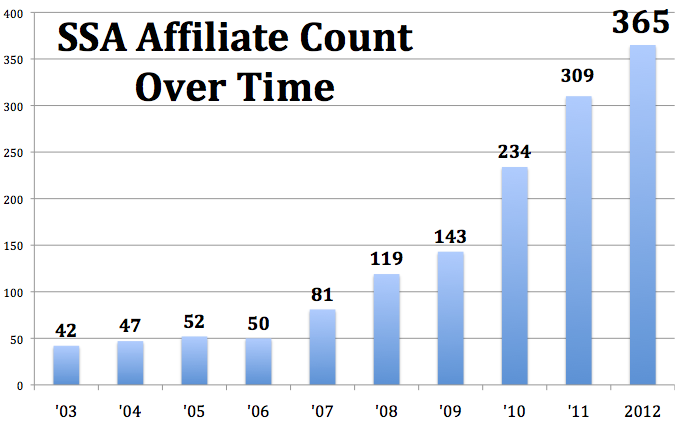 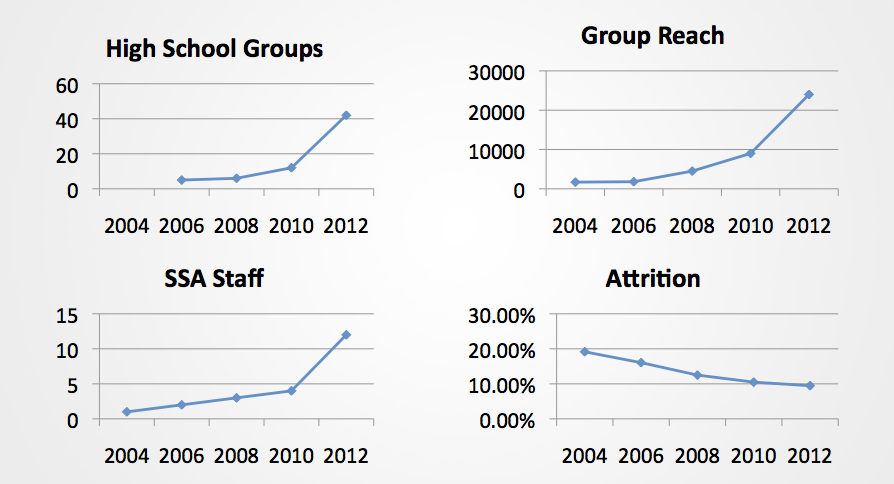 We’re seeing increased growth in high schools, with our number of high school affiliates tripling in the past year. Our groups are getting larger and reaching a wider audience, in every measure from formal membership to attendance at events to Facebook groups and email lists. SSA’s staff has grown massively to keep up with the demand, and as a result, we’ve been able to pull attrition down from 20% only eight years ago to under 8% in the spring of 2012! And these groups are doing more, gauging from the fact that demand for our services is way up, from speaker events to tabling supplies to group starting packets.

I get asked all the time why we’re seeing this level of growth, and what’s caused the big spike over the last five years. So I’ve taken a look and come up with some likely influential factors. For starters, 2006 saw the release of an interesting little book by a British biology professor, both of which you’ve probably heard of. Around the same time, we saw Letter to a Christian Nation, Breaking the Spell, and God is Not Great all hit bookshelves. In 2008, the Secular Student Alliance hired a new campus organizer, and I’d like to think that I’ve played at least a little part in building up the SSA’s incredible Campus Organizing Team. Starting around 2009, the Secular Student Alliance started showing up in the media, including articles in The New York Times, USA Today, Teaching Tolerance, and many more places, helping to spread the word that there is support for secular students out there, and that nontheistic students are not alone.

What are Students Doing That’s So Great?

There’s a phrase that we hear a lot at SSA: “students are the future.” Well, that’s definitely true, but students are also the present! They’re out there doing really incredible things, right now!

I originally gave this talk at the Freethought Festival 2012, an event organized and hosted primarily by students (with a ton of help from the off-campus community as well, including the Madison Area Coalition of Reason). Student groups are also responsible for Skepticon, the University of Northern Iowa’s Darwin Week, ReasonFest and Skeptics of Oz in Kansas, and many other awesome events. Students are also blazing a trail in interfaith programs, holding amazing service projects, creating national programs (like Ask-an-Atheist Day) and defending the separation of church and state (see: Jessica Ahlquist, Damon Fowler,Zack Kopplin).

Where do we go from here?

The secular student movement is expanding in all kinds of directions. We’re seeing more groups in high schools (due in part to the SSA’s high school outreach) and at graduate and professional schools. Groups are forming into regional networks, providing communication and opportunities for collaboration to students in a specific area. SSA is starting to reach out to support advisors more directly, as well as working with student affairs professionals within university administrations.

If the SSA were to continue our current growth rates, we’d have over a thousand affiliate groups in five years. 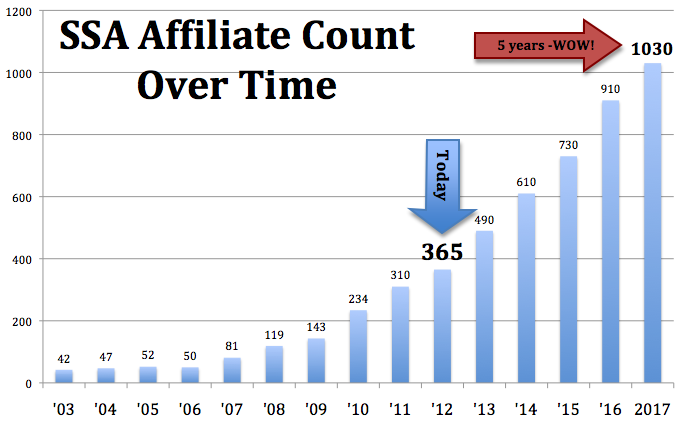 That sounds crazy at first, but as we break down the numbers, it actually starts to look more and more like it might be on the low side. There are about 6,000 colleges in the U.S., and over 24,000 public high schools – that’s a lot of opportunity for expansion! And looking at a similar organization, we see that the Gay-Straight Alliance has about 4,500 registered groups. Our 1,000 groups in five years is starting to look very conservative indeed!

Let’s talk about culture wars. In a lot of ways, Cru (formerly Campus Crusade for Christ) is the cultural competition for the SSA. We have similar organizational models and we’re both based around a worldview. So let’s take a look at how we’re doing: 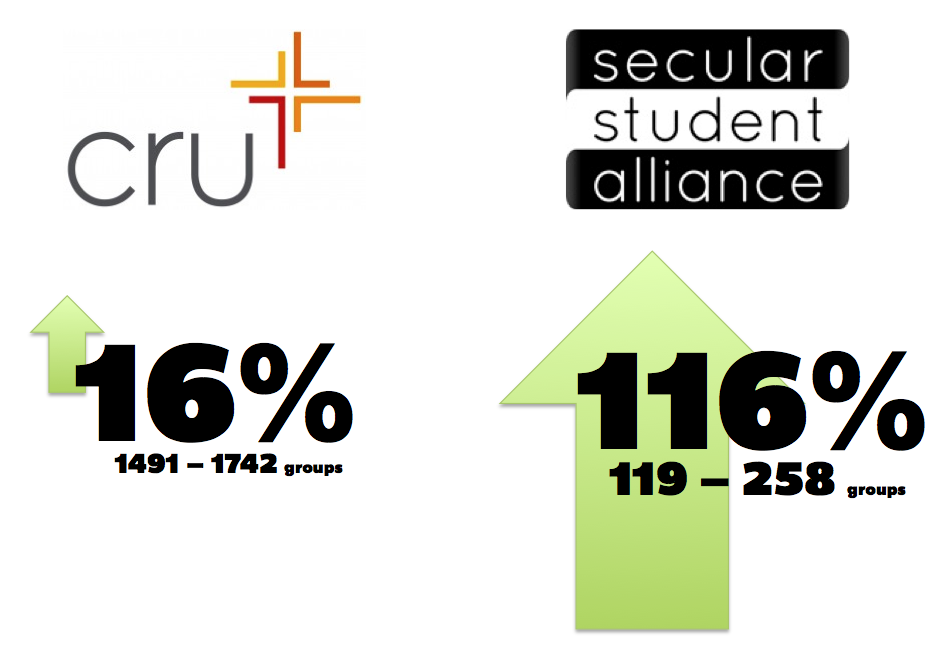 We are growing so much faster than Cru that we get an extra digit in our growth percentage!  And we’re maintaining that growth: today we have 353 campus affiliates, while Cru, with all their staff, can’t be bothered to post numbers more recent than the 2010-2011 school year.  Cru has a massively larger budget, the majority of the U.S. population to draw from (76% Christian), an organized political voting bloc to give them politicians and laws and supreme court justices in their favor. But they are losing in the cultural war.

The secular students are winning, and they are unstoppable!

If free thinking is your passion, be sure to visit our website and sign up for our course experiences that can translate into scholarship dollars for you.