The Unrealized Horrors of Population Explosion 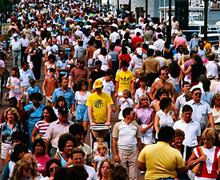 By Clyde Haberman | The second half of the 1960s was a boom time for nightmarish visions of what lay ahead for humankind. In 1966, for example, a writer named Harry Harrison came out with a science fiction novel titled “Make Room! Make Room!” Sketching a dystopian world in which too many people scrambled for too few resources, the book became the basis for a 1973 film about a hellish future, “Soylent Green.” In 1969, the pop duo Zager and Evans reached the top of the charts with a number called “In the Year 2525,” which postulated that humans were on a clear path to doom.

No one was more influential — or more terrifying, some would say — than Paul R. Ehrlich, a Stanford University biologist. His 1968 book, “The Population Bomb,” sold in the millions with a jeremiad that humankind stood on the brink of apocalypse because there were simply too many of us. Dr. Ehrlich’s opening statement was the verbal equivalent of a punch to the gut: “The battle to feed all of humanity is over.” He later went on to forecast that hundreds of millions would starve to death in the 1970s, that 65 million of them would be Americans, that crowded India was essentially doomed, that odds were fair “England will not exist in the year 2000.” Dr. Ehrlich was so sure of himself that he warned in 1970 that “sometime in the next 15 years, the end will come.” By “the end,” he meant “an utter breakdown of the capacity of the planet to support humanity.” 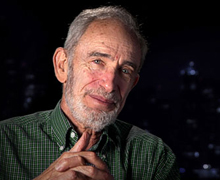 As you may have noticed, England is still with us. So is India. Hundreds of millions did not die of starvation in the ’70s. Humanity has managed to hang on, even though the planet’s population now exceeds seven billion, double what it was when “The Population Bomb” became a best-seller and its author a frequent guest of Johnny Carson’s on “The Tonight Show.” How the apocalyptic predictions fell as flat as ancient theories about the shape of the Earth is the focus of this installment of Retro Report, a series of video documentaries examining significant news stories of the past and their aftermath.

After the passage of 47 years, Dr. Ehrlich offers little in the way of a mea culpa. Quite the contrary. Timetables for disaster like those he once offered have no significance, he told Retro Report, because to someone in his field they mean something “very, very different” from what they do to the average person. The end is still nigh, he asserted, and he stood unflinchingly by his 1960s insistence that population control was required, preferably through voluntary methods. But if need be, he said, he would endorse “various forms of coercion” like eliminating “tax benefits for having additional children.” Allowing women to have as many babies as they wanted, he said, is akin to letting everyone “throw as much of their garbage into their neighbor’s backyard as they want.”

Dr. Ehrlich’s ominous declarations cause head-shaking among some who were once his allies, people who four decades ago shared his fears about overpopulation. One of them is Stewart Brand, founding editor of the Whole Earth Catalog. On this topic, Mr. Brand may be deemed a Keynesian, in the sense of an observation often attributed to John Maynard Keynes: “When the facts change, I change my mind, sir. What do you do?” Mr. Brand’s formulation for Retro Report was to ask, “How many years do you have to not have the world end” to reach a conclusion that “maybe it didn’t end because that reason was wrong?”

One thing that happened on the road to doom was that the world figured out how to feed itself despite its rising numbers. No small measure of thanks belonged to Norman E. Borlaug, an American plant scientist whose breeding of high-yielding, disease-resistant crops led to the agricultural savior known as the Green Revolution. While shortages persisted in some regions, they were often more a function of government incompetence, corruption or civil strife than of an absolute lack of food.

Some preternaturally optimistic analysts concluded that humans would always find their way out of tough spots. Among them was Julian L. Simon, an economist who established himself as the anti-Ehrlich, arguing that “humanity’s condition will improve in just about every material way.” In 1997, a year before he died, Mr. Simon told Wired magazine that “whatever the rate of population growth is, historically it has been that the food supply increases at least as fast, if not faster.”

Somewhere on the spectrum between Dr. Ehrlich the doomsayer and Mr. Simon the doomslayer (as Wired called him) lies Fred Pearce, a British writer who specializes in global population. His concern is not that the world has too many people. In fact, birthrates are now below long-term replacement levels, or nearly so, across much of Earth, not just in the industrialized West and Japan but also in India, China, much of Southeast Asia, Latin America — just about everywhere except Africa, although even there the continent-wide rates are declining. “Girls that are never born cannot have babies,” Mr. Pearce wrote in a 2010 book, “The Coming Population Crash and Our Planet’s Surprising Future” (Beacon Press).

Because of improved health standards, birthing many children is not the survival imperative for families that it once was. In cramped cities, large families are not the blessing they were in the agricultural past. And women in many societies are ever more independent, socially and economically; they no longer accept that their fate is to be endlessly pregnant. If anything, the worry in many countries is that their populations are aging and that national vitality is ebbing.

Still, enough people are already around to ensure that the world’s population will keep rising. But for how long? That is a devilishly difficult question. One frequently cited demographic model by the United Nations envisions a peak of about nine billion around 2050. Other forecasts are for continued growth into the next century. Still others say the population will begin to drop before the middle of this century. The trickiness of numbers is underscored by a look at population density. It is generally assumed that having too many people crammed into a small territory is a recipe for poverty and other social ills. Yet according to the United Nations, the three places with the highest density are Monaco, Macao and Singapore. Not one of them remotely qualifies as a desperate case.

In Mr. Pearce’s view, the villain is not overpopulation but, rather, overconsumption. “We can survive massive demographic change,” he said in 2011. But he is less sanguine about the overuse of available resources and its effects on climate change (although worries about the planet’s well-being could be a motivator for finding solutions, much as demographic fears may have helped defuse the population bomb).

“Rising consumption today far outstrips the rising head count as a threat to the planet,” Mr. Pearce wrote in Prospect, a British magazine, in 2010. “And most of the extra consumption has been in rich countries that have long since given up adding substantial numbers to their population, while most of the remaining population growth is in countries with a very small impact on the planet.”

To some extent, worrying about an overcrowded planet has fallen off the international agenda. It is overshadowed, as Mr. Pearce suggests, by climate change and related concerns. The phrase “zero population growth,” once a movement battle cry, is not frequently heard these days; it has, for instance, appeared in only three articles in this newspaper over the last seven years.

But Dr. Ehrlich, now 83, is not retreating from his bleak prophesies. He would not echo everything that he once wrote, he says. But his intention back then was to raise awareness of a menacing situation, he says, and he accomplished that. He remains convinced that doom lurks around the corner, not some distant prospect for the year 2525 and beyond. What he wrote in the 1960s was comparatively mild, he suggested, telling Retro Report: “My language would be even more apocalyptic today.”

The Unrealized Horrors of Population Explosion