The Student Solution to Affirmative Action 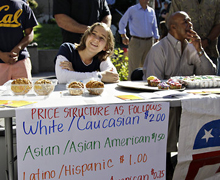 By Mark Bauerlein | With yet another affirmative action case reaching the Supreme Court just months after the last decision, and with that previous decision likely to produce multiple local challenges to admissions procedures at selective colleges across the country, we might ask whether the courts are the best place to settle this divisive issue of racial preferences.

The Grutter judgment of 2003 didn’t lower the controversy, and neither did the Fisher judgment of 2013, and the upcoming Schuette case won’t, either. People on both sides don’t just disagree. They bring a passionate sense of fairness to the debate that puts the opposition on the side of unfairness. Whichever side loses each skirmish in the issue doesn’t only feel defeated — it feels wronged, and that inspires only further legal action.

Instead of having lawyers and judges determine the future of racial preferences, perhaps we should appeal to the group affected by them most: college applicants. They have usually been the plaintiffs in cases over the years, and outcomes have turned on data relative to admitted students, so why not ask them to address the controversy? In fact, they have the power to resolve the issue entirely, to everyone’s satisfaction, and they can do it voluntarily and on principle.

The stratagem is simple. The 2012 American Freshman Survey reports that 30 percent of first-year college students are “Liberal” or “Far Left,” while nearly half of them declare themselves “Middle-of-the-Road” (47.5 percent). I assume that all the liberal or left students favor racial preferences in college admissions and half of the moderates do. Over all, white students make up 70 percent of the entire first-year student population. This yields a significant portion of white college students who endorse the policy, perhaps one-quarter to one-third of the overall student population. After all, when the American Freshman Survey posed to respondents the assertion, “Racial discrimination is no longer a major problem in America,” only 23 percent agreed.

What would happen if all those white students who assert that racism is still a “major problem” and who approve of affirmative action as one remedy followed their beliefs and did not apply to selective colleges such as Williams, Wesleyan, Boulder and U.Va.?  How would that alter the demographics of elite campuses?

The admissions offices at those schools would face a less-competitive white applicant pool and could boost minority acceptances. Thousands of white students with eight AP courses, a 4.0+ GPA, and 95th-percentile SAT scores would not join the mix and raise the averages.

Given their strong support of racial diversity, the schools would rejoice at not having to engage in dicey racial engineering, and students themselves would act on their convictions. If they espouse diversity, they won’t attend colleges with low African American and Hispanic make-ups. Wesleyan University reports that only 7 percent of the student body is “Black or African American,” NYU only 4.3 percent. Dartmouth is 8.75 percent Hispanic/Latino, Duke 6.6 percent. Liberal white students (and liberal white parents) should shun them until the ratio matches up with the general population.

Nobody would object and the debate would end. Liberals would support it because it delivers the revered goal of racial diversity, while conservatives would approve because it comes from individual initiative, not state mandate.

Conservative white students may still apply where they wish, and though liberals may accuse them of hindering racial justice, conservatives may reply, “You have behaved consistently with your beliefs — let me do the same.” In but a few years, the college campus would no longer be a legal battle zone or a hive of racial resentments.

It sounds altogether unrealistic, of course, given the magical prestige of the words Princeton, Columbia, Harvard, et al.

For many people, applying elsewhere means giving up a legacy, forgoing an ambition, perhaps sacrificing a better future. That’s true, but increasingly to a lesser extent, critics now arguing that the cachet of elite institutions is overdone and that their price tag is inflated.

Employers today rely less on G.P.A. and institution and more on interviews and internships when making hiring decisions.

Not only that, but we shouldn’t ignore the hypocrisy of advancing a racially diverse society through affirmative action mechanisms, while refusing to participate in it on one’s own. If racial diversity in elite spaces is so important, does an individual who might get into Williams but goes to UMass-Boston look like a disappointment?