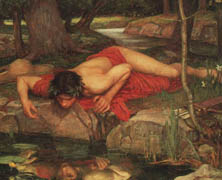 By Eric Metaxas | Young People and Self-Esteem | We’ve all heard the Greek myth of Narcissus, the proud young man who saw his reflection in a pool and fell in love with it. Narcissus was unable to break away from his own gaze, and eventually died by the side of the pool.

Sad to say, if one survey is correct, we may be raising a generation of young people who are succumbing to the terrible danger of unhealthy, delusional, and misdirected self-love.

The recently released American Freshman Survey finds a gaping chasm between students’ perceptions of their giftedness and drive to succeed, and the reality. For example, according to lead researcher Jean Twenge, today’s freshmen are much more likely to rate their writing abilities as “gifted” than their predecessors. But their test scores— and often their reading and writing abilities—are far below their 1960s counterparts.

Elisabeth Wilkins of Empowering Parents summarizes, “in the past four decades, students’ opinions of themselves have soared—even though test scores have gone down.”

This mental disconnect is only part of the problem.

Twenge says that narcissism in college students has risen 30 percent in 30 years. She defines narcissism as “a need to pump yourself up with praise and approval in order to feel okay.”

You could call the current preening crop of kids the Narcissistic Generation, but apparently it’s no fun to always be staring at your reflection in the pool. Twenge notes that anxiety and depression are on the rise among young adults, as well as failure to reach personal goals.

One business executive notes, “I’ve had new hires become irate when they’re not rewarded with all the goodies right away, but they don’t seem to understand that they need to put in years of hard work in order to achieve what they want in life.”

There are several reasons for this rising tide of narcissists. First is the cultural premium put on building up self-esteem—the idea that everyone gets a trophy just for participating, and no one gets critiqued on actual performance.

Another reason is the flood of social media and related technologies. Psychiatrist Keith Ablow has noted, “I have been writing a great deal over the past few years about the toxic psychological impact of media and technology on children, adolescents and young adults, particularly as it regards turning them into faux celebrities—the equivalent of lead actors in their own fictionalized life stories. Using computer games,” Ablow continues, “our sons and daughters can pretend they are Olympians, Formula 1 drivers, rock stars or sharpshooters. These are the psychological drugs of the 21st century, and they are getting our sons and daughters very sick, indeed.”

Wilkins of Empowering Parents suggests that we need to encourage in our kids “empathy, hard work, and more real-world, face-to-face interactions.” In addition, she says that we must help our children develop compassion and “do things that are worthy.”

I agree one hundred percent, and we would do well to remember Jesus’ punch line to the parable of the Pharisee and the tax collector in Luke 18: “For everyone who exalts himself will be humbled, and he who humbles himself will be exalted.”