The Kids are (not Quite) All Right 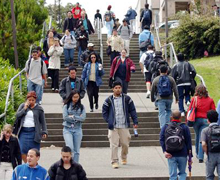 By Eric Metaxas | Can a narcissistic generation rise to the challenges that face our society? Yeah, that’s a leading question.

A year ago, David McCullough, a Massachusetts high school teacher, became an overnight sensation when he told graduating seniors that “despite  . . . that nice Mister Rogers and your batty Aunt Sylvia, [and] no matter how often your maternal caped crusader has swooped in to save you … you’re nothing special.”

A year later, in its May 20th edition, Time Magazine has weighed in on the subject. In a schizoid piece, it calls “Millennials,” those born between 1980 and 2000, “lazy entitled narcissists,” yet it insists that they somehow will “save us.”

Author Joel Stein, who’s forty-three, begins with some sobering data. For instance, according to the National Institutes of Health, the incidence of narcissistic personality disorder is three times as high among twenty-somethings than among those over sixty-five.

Likewise, the average college student in 2009 scored significantly higher on a narcissism scale than his counterparts in 1982.

The high self-regard doesn’t end with graduation: forty percent of all Millennials believe that they should be promoted every two years regardless of their actual job performance.

Not surprisingly for a generation raised on social media, fame is also very important to this generation. Four times as many girls in this generation would prefer to be an assistant to a famous person than the CEO of a corporation.

Most troubling of all are their ideas about right and wrong. “The guiding morality of 60 percent of Millennials in any situation is that they’ll just be able to feel what’s right.”

If you’re wondering how the people described will “save us,” you’re not alone. And Stein doesn’t really say. The most he can come up with is a series of contradictions: they are both “optimistic” and “wary.” They have “embraced the system” yet do not respect authority. They are “idealistic pragmatists.” And while they “hate Joseph Kony,” the infamous Ugandan warlord, “they aren’t going to do anything about Joseph Kony,” either.

In other words, they are what we made them. It’s the predictable outcome of our emphasis on “self-esteem.” If you’re constantly telling a child how “special” he is and running interference to remove any obstacle, narcissism and a sense of entitlement is the most likely outcome.

Of course, there are plenty of exceptionally non-narcissistic young people. But as the response to McCullough’s speech suggests, the portrait painted by Stein is consistent with people’s general experience of Millennials.